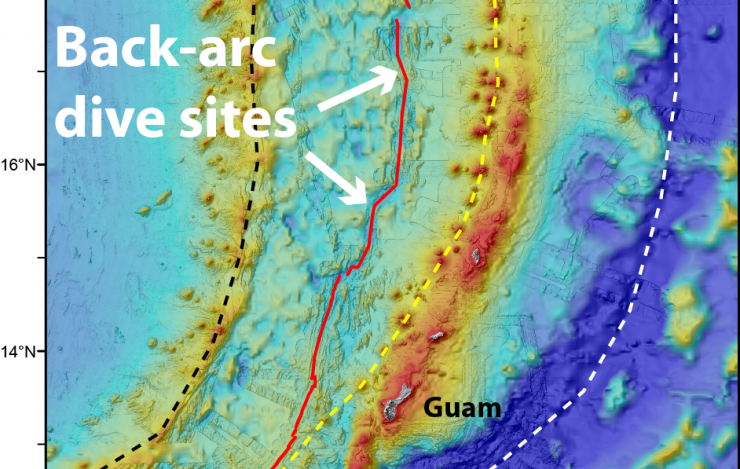 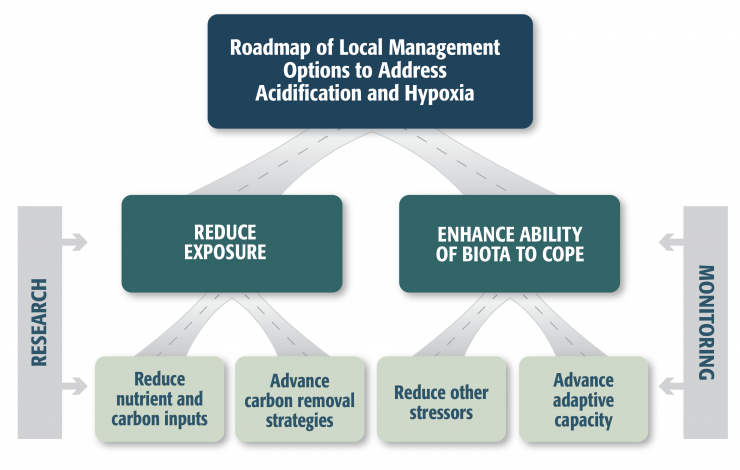 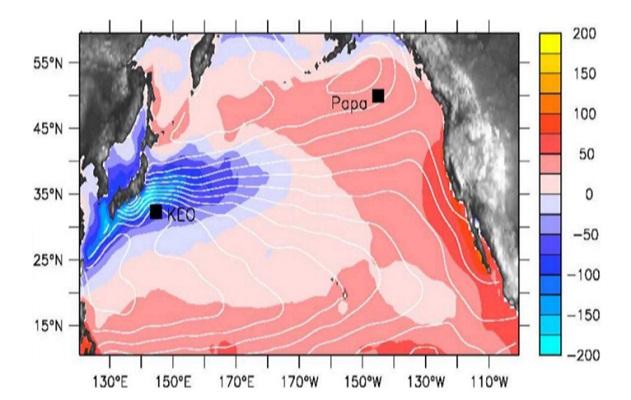 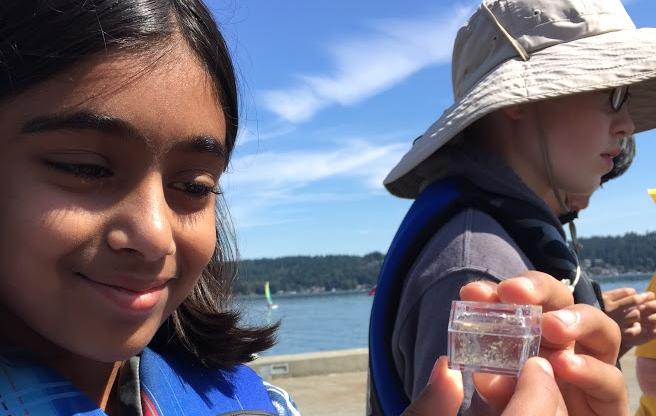 The Warmest January/February in the Arctic 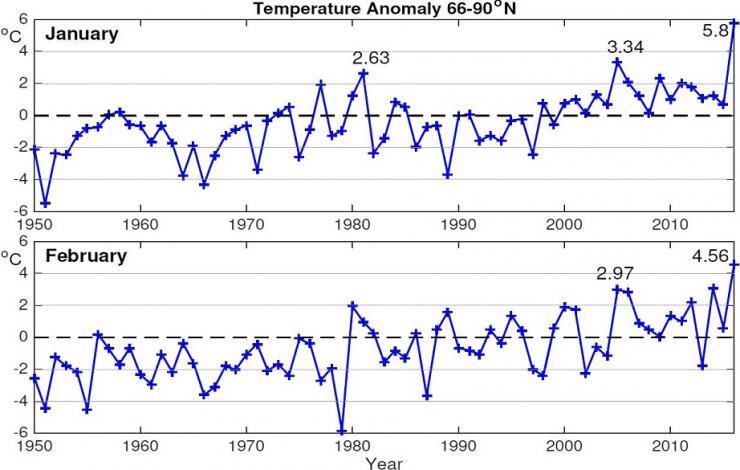 These graphs show the January and February surface air temperature anomaly averaged over the Arctic area (66–90°N) based on NCEP/NCAR Reanalysis. Units are in °Celsius.

Right from the beginning of 2016 new records have been set in the Arctic: warmest air temperature on record in both January and February, and the lowest sea ice cover in February. The average temperature anomaly has reached a record of 5.8°C (10.4°F) for January and 4.56°C (8.2°F) for February. This is the warmest period in the Arctic for these two consecutive months since 1948. The Arctic sea ice extent for February 2016 averaged 14.2 million square kilometers (5.5 million square miles), the lowest February extent in the satellite record. Once Arctic scientists at PMEL put this past January and February into historical perspective, they saw that this unusual warmth is unprecedented in both months. This unprecedented warmth is mainly due to the large positive temperature anomalies in the Arctic Ocean and over the North American continents. This year’s record high temperature and low sea ice cover increases concerns about what will happen next in the Arctic and globally. 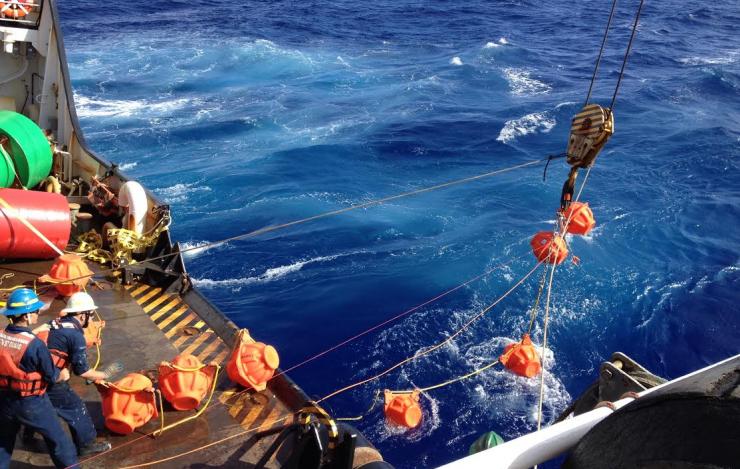 Recovery of the hydrophone during the Challenger Deep mission in 2015. Photo Credit: Robert Dziak

PMEL scientists have analyzed the recordings collected from a successful deployment of a deep-ocean hydrophone mooring in Challenger Deep in the Mariana Trench. The Challenger Deep is the deepest known location in Earth's oceans, about 36,000 feet  (10,971 meters) beneath the ocean surface. It is located in the Pacific Ocean near Guam. The recordings captured a baleen whale’s call, a magnitude 5.0 earthquake, an overhead typhoon and ship traffic noise. PMEL, in collaboration with the crew of the Coast Guard Cutter Sequoia and with funding from NOAA’s Office of Ocean Exploration and Research, deployed the hydrophone on January 17, 2015 for 22 days. The purpose of the project was to establish a baseline for noise in the deepest part of the Pacific Ocean.

For more information, visit the NOAA PMEL Acoustics Group and read the press release from NOAA. 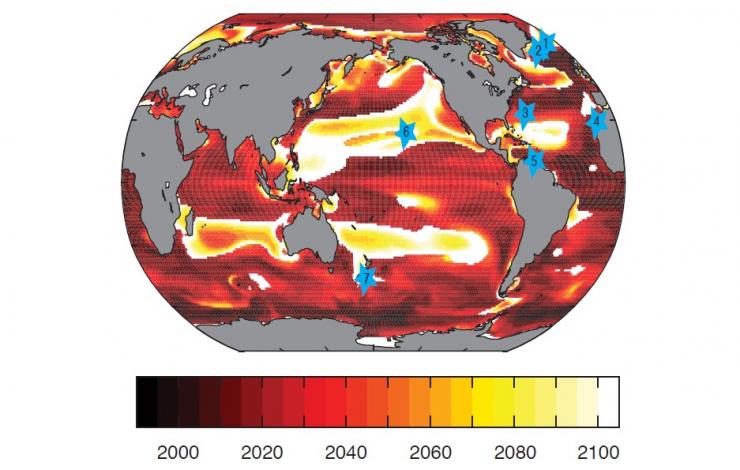 This map shows the timeframe (year) in which the anthropogenic trend becomes distinguishable from internal climate variability. The darker red indicates earlier emergence of the trend while the orange/white areas show emergence later on. The blue stars indicate current ocean carbon sampling locations.

The ocean absorbs a significant fraction, about 40%, of carbon released by fossil fuel burning, thereby reducing climate warming.  However, natural climate variability makes it difficult to directly observe trends in the amount of anthropogenic carbon the ocean is taking up with time.  PMEL scientist and collaborators utilized a modeling approach to separate out the ocean carbon trend due to man-made carbon emissions from this variability.   This separation illustrates the timeframe over which we may expect to observe human driven change in carbon uptake in different ocean regions.  The results show that these trends are largely not detectable at present, but may begin to emerge in certain regions between 2020-2050. The Southern Ocean and Atlantic region are projected to show this uptake first, while the latest emergence occurs in the Pacific and Indian subtropical regions.

For more information, read the article in Nature, along with Nature's News and Views,  a press release from the University of Wisconsin and visit the NOAA PMEL Arctic project webpage. 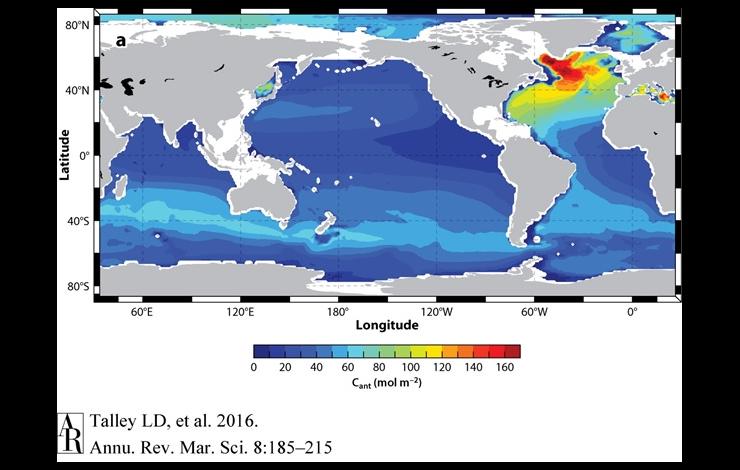 This map shows the concentration of anthropogenic carbon (carbon that is emitted by humans) in the oceans. The highest concentration is shown in red in the Northwest Atlantic Ocean.

NOAA scientists and collaborators have just published a review article in Annual Review of Marine Science that summarizes our GO-SHIP repeat hydrography efforts conducted since the early 1990’s across the global oceans. The article found that the ocean is taking up a large fraction of the carbon dioxide and most of the excess heat caused by fossil-fuel burning and land use changes. Roughly 27% of the carbon dioxide released into the atmosphere by human activities is stored in the ocean, which in turn lowers the pH in the upper ocean. The ocean is taking up most of Earth's excess anthropogenic heat, with about 19% of this excess in the deep ocean beneath 2,000 m, dominated by Southern Ocean deep-ocean warming. The global hydrography has mapped dissolved organic carbon, a large, bioactive reservoir, for the first time and quantified its contribution to export production (∼20%) and deep-ocean oxygen utilization.

Read the abstract and article in Annual Review of Marine Science and learn more about the NOAA PMEL Carbon Program. 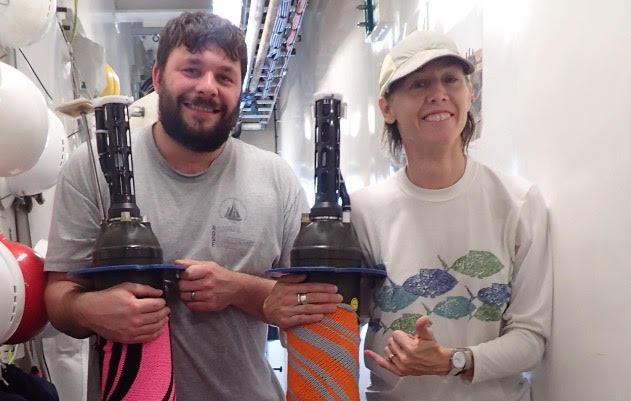 PMEL’s Argo float group relies upon and is very grateful for assistance from scientists and crew in deploying PMEL Argo floats on a variety of ships in oceans around the globe.  PMEL Argo recently sent six floats to the R/V Falkor of the Schimdt Ocean Institute for deployment on a science cruise studying oxygen minimum zones across in the tropical Pacific.  Float deployments during this cruise helped to fill a coverage gap in the Argo array that had opened up in this crucial region during a significant El Niño.  As an unexpected bonus, artist-at-sea Michelle Schwengel-Regala was yarn-bombing on the Falkor during this cruise. Here are pictures of two PMEL Argo floats on the Falkor nestled in her dazzling knitted float-cozies!  The yarn was removed and repurposed prior to deployment of the floats, all of which are now reporting vital ocean temperature and salinity data back from the tropical Pacific, monitoring the evolving El Niño. 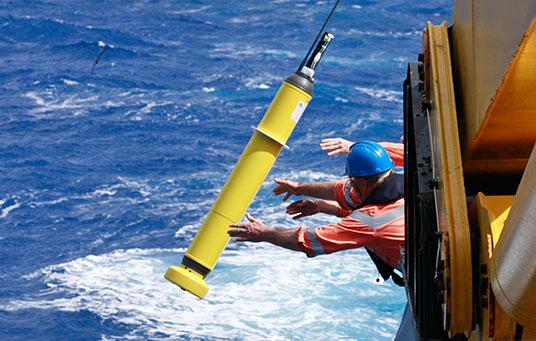 NOAA scientists and collaborators from Lawrence Livermore National Laboratory have just published a paper in Nature Climate Change that shows that approximately half of the global ocean heat content increase since 1865 has occurred over the past two decades. This study included ocean temperature measurements that went as far back as the 19th century and compared them with a suite of climate models to analyze changes over time. While the majority of measurements are from the upper ocean, study results show the deep ocean is storing an increasing fraction of the Earth's net heat uptake as a result of global warming with time. To get more temperature measurements of the deep ocean, PMEL is working with university partners to develop and deploy regional pilot arrays of Deep Argo floats, which can measure to depth of 6,000 meters.

Read the press release from NOAA Research and the Lawrence Livermore National Laboratory and learn more about Large Scale Ocean Physics at PMEL.