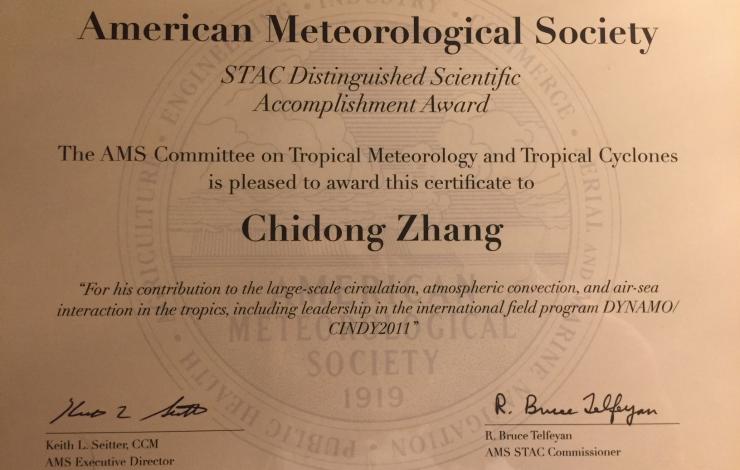 Chidong Zhang recently received the first Distinguished Scientific Accomplishment Award from the American Meteorological Society (AMS) Committee on Tropical Meteorology and Tropical Cyclones "for his contribution to the large-scale circulation, atmospheric convection, and air-sea interaction in the tropics, including leadership in the international field program DYNAMO/CINDY2011". The award was presented at the AMS 33rd Conference on Hurricanes and Tropical Meteorology in Florida.

The MJO is weather phenomenon that starts over the equatorial Indian Ocean and has global climate and weather impacts. In the United States, MJO can influence the development of hurricanes, enhance rainfall on the West Coast in the form of atmospheric rivers, and modulate the North American monsoon, an important source of water in the western US. The results of DYNAMO will help researchers better understand and forecast weather and climate features that develop in the Indian Ocean.

The Scientific and Technological Activities Commission (STAC) Distinguished Scientific/Technological Accomplishment Award recognizes an individual who has made significant contributions to the discipline and is well recognized within the discipline as being a science/technological leader.  The STAC is composed of Committees and Boards, which in the aggregate are made up of hundreds of volunteers primarily from the membership of the Society. STAC helps to advance science and technology by promoting the open exchange of ideas, strengthening our disciplinary communities, enhancing collaboration and dialog among these communities, embracing diversity, celebrating and fostering excellence, and cultivating the next generation of scientists and leaders.