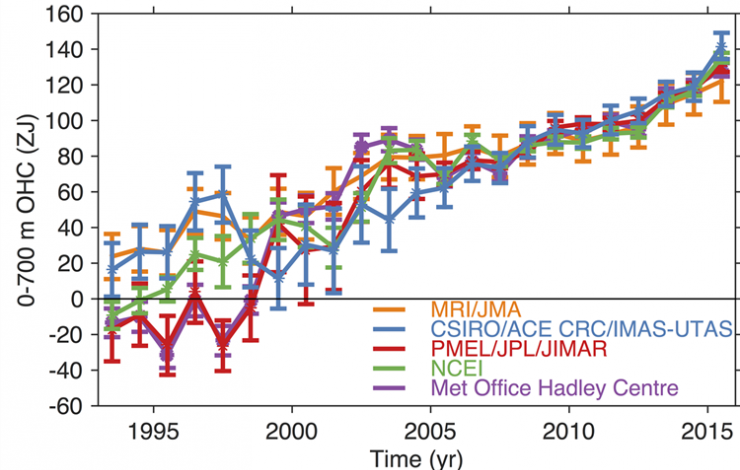 Every year NOAA leads a team of international scientists in issuing a report on the state of the climate in the year just passed, published as a supplement to Bulletin of the American Meteorological Society. Nine Federal, JISAO, and JIMAR scientists resident at PMEL co-authored four of twelve sections in the Global Oceans chapter and one section in the Arctic chapter for the State of the Climate in 2015 report, published in July 2016.  In addition, Dr. Gregory Johnson served as lead editor of the Global Oceans chapter and participated in the media roll-out event.

Dr. Johnson’s overview for the Global Oceans chapter noted wide-ranging impacts of the significant El Niño of 2015, the continued warm “Blob” and a harmful algal bloom, both off the West Coast of North American, and the continued warm phase of the Pacific Decadal Oscillation, along with record high sea-surface temperatures, ocean heat content (see figure), and sea level. The ocean heat content section of that chapter, led by Drs. Johnson and John Lyman, also noted the vertical redistribution of ocean temperature with El Niño, which warmed the near-surface ocean considerably in 2015. The sea surface salinity subsection, authored by Drs. Johnson and Lyman, documented changes in surface salinity patterns including freshening under the Intertropical Convergence Zone and increased salinity around the Maritime Continent, consistent with El Niño. The ocean carbon section, authored by Drs. Richard Feely, Brendan Carter, Jessica Cross, Chris Sabine, and Ms. Cathy Cosca, reported on recent estimates of the ocean uptake of carbon dioxide, about 10–30% of human emissions, using both air-sea flux observations and inventories of sub-surface carbon.  Finally, Drs. James Overland and Muyin Wang contributed to the Air temperature section for the Arctic chapter, noting the record warm 2015 air temperatures at land stations in the Arctic (tied with 2007 and 2011) and the faster rate of warming of air temperatures at Arctic land stations compared with a global average for land stations.

The report garnered significant media attention, including these wire stories by AFP and AP reporters that were picked up by multiple outlets: