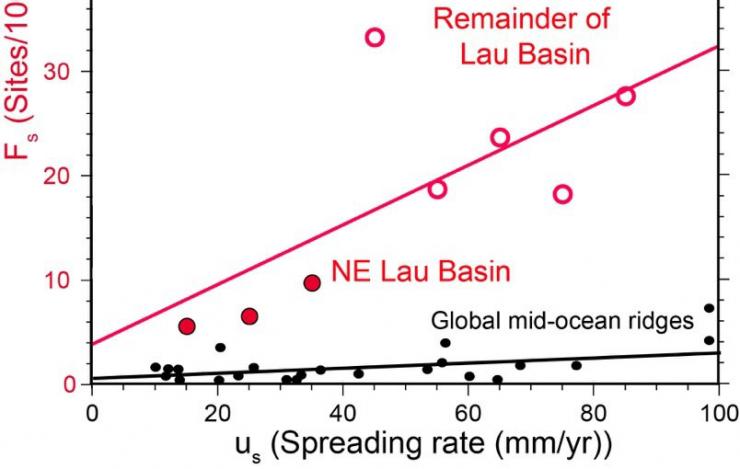 Relationship between the spreading rate of ridges and the spatial density (sites/100 km) of active hydrothermal sites on a given ridge segment. Higher spreading rates produce a greater magma supply to drive hydrothermal venting. In the Lau Basin, site production is ~10x higher than on other mid-ocean ridges. Red box in inset: NE Lau Basin.

Fluids in the Earth’s crust are heated by magma rising to the seafloor where tectonic plates separate or collide. These discharging fluids cool hot rock, construct mineral deposits, nurture biological communities, alter deep-sea mixing and circulation patterns, and profoundly influence ocean chemistry and biology. Since the discovery of deep-sea hydrothermal vents in 1979, scientists have identified more than 700 sites where fluids presently emerge from the seafloor. Over the subsequent 40 years, the relatively small NE Lau Basin, some 2000 kilometers north of New Zealand, has been found to host one of the most densely populated and geologically diverse groups of active venting sites ever discovered.

The NE Lau Basin is bounded on the east by a volcanic arc created by tectonic plates colliding at speeds up to 150 mm per year, and on the west by a series of boundaries where plates diverge at speeds up to ~40 mm per year. The movement of these plates creates multiple opportunities for magma to rise to the seafloor and fuel the hydrothermal circulation that leads to seafloor venting. Researchers first visited the area and detected hydrothermal plumes in the water overlying the Basin in 2004. Beginning in 2008, the NOAA Pacific Marine Environmental Laboratory Earth-Ocean Interaction (EOI) program, together with various collaborating institutions and organizations, began a series of cruises (2008, 2009, 2010, 2012, and 2017) to investigate hydrothermal activity in the NE Lau Basin. This work has involved extensive surveying of the water column to identify hydrothermal plumes and collect water samples for chemical and biological analyses; mapping and sampling the seafloor using shipborne dredges, camera tows, and Remotely Operated Vehicles, as well as Autonomous Underwater Vehicles; and moorings with sensors to detect earthquakes and subsequent landslides on submarine volcanoes.

This exhaustive investigation catalogued 42 separate active hydrothermal sites, a remarkable number for such a limited area, 31 of which occur on spreading ridges (the remainder occur on discrete volcanoes not associated with spreading ridges). Previous work by EOI and colleagues identified 95 sites on spreading ridges in other parts of the broader Lau Basin. Global studies have shown that faster spreading supplies more magma and creates more hydrothermal sites. The same calculation for the Lau Basin, including the new NE Lau Basin results, also shows a strong correlation with spreading rate, but at a site production rate 10 times greater than the global average. This increase results from meticulous exploration in the Lau Basin and a regionally enhanced magma supply.