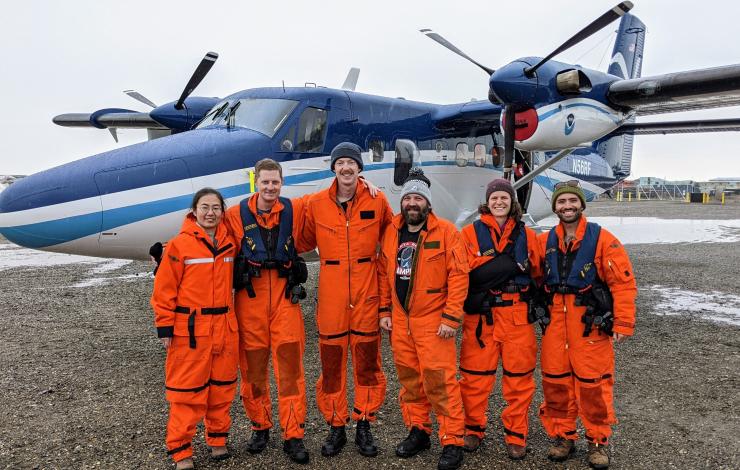 The team of NOAA and University of Washington Cooperative Institute scientists during the first flight mission over Alaskan waters to conduct renewed research on Arctic ocean heat flows.

The team completed the second leg of the 2022 mission from the northernmost point of Alaska, Utqiagvik. They deployed 24 temperature profilers, Airborne eXpendable Bathy Thermographs (AXBTs), in groups of six along four different sections of an ocean slope region. AXBTs are small probes that measure ocean temperature as a function of depth as they travel through the water column. The ocean floor contains a narrow channel where warm water flows into the Arctic, eventually splitting into two flows moving left and right. The goal of this research is to measure the water temperature along this slope and determine the total heat content that each pathway is guiding, including how much of that heat moves in each direction. Determining the heat flow (in both directions) provides important information that contributes to sea ice formation and retreat, as well as effects on downstream algal blooms.

In June, the team began the first flights from Prudhoe Bay to Kotzebue and deployed eight floats that measure ocean temperature to support data collection efforts of the Distributed Biological Observatory. The team deployed 8 AXBTs that will provide critical data in this undersampled area for the next few years. 2 of the 8 floats are transmitting ocean temperature data and measurements were collected between sampling locations.

This work is a fresh take on efforts established by the late Dr. Kevin Wood. Dr. Wood was deeply committed to understanding and communicating the nuances of science in a way that inspired and motivated people to work to mitigate climate change. To continue his legacy, special funding was brought together from NOAA PMEL, NOAA OMAO, and the University of Washington CICOES to support these flights.