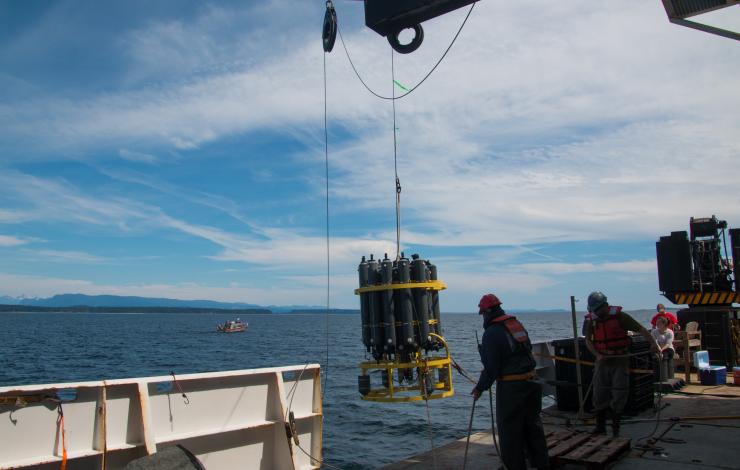 NOAA and partner scientists speaking Friday, August 17, at the Goldschmidt annual international conference on geochemistry reported their research is finding that coastal waters and river estuaries are more vulnerable to ocean acidification than offshore waters. These waters are more severely affected by ocean acidification because they receive fresh water runoff that contributes to higher levels of dissolved carbon dioxide.

This acidification, detected in research cruises off the United States West Coast and Gulf of Mexico, can cause some marine fish species to suffer cognitive problems and disorientation, the scientists said, with these fish losing their way or even swimming towards predators. Researchers also find that dissolved carbon dioxide levels are disproportionately affecting the wellbeing of fish in colder northern waters, such as off the state of Washington, than in warmer coastal waters such as the Gulf of Mexico.

“We checked coastal waters in the Gulf of Mexico, and all along the U.S. West coast,” said Richard Feely, a NOAA senior scientist.  “We found that cold water changes the water’s chemistry,  so that it can’t buffer itself as effectively against changes in acidity. This can cause large fluctuations in the CO2 levels according to the season, with colder areas being more vulnerable to large swings in the partial pressure of carbon dioxide in the ocean.  It is these increases in partial pressure of carbon dioxide which threaten the well-being of marine life.”

NOAA and partner scientists studied water samples collected from a series of research cruises that took place in 2007, 2011, 2012, 2013 and 2016, and found that there were significant differences in the levels of CO2 dissolved in the ocean water. The research was funded through the NOAA Ocean Acidification Program .

To read the full news release go online to: https://goldschmidt.info/2018/pressReleasesView

Editor's note: The following story is adapted from a news release issued Friday, August 17, 2018,  at the Goldschmidt Conference.