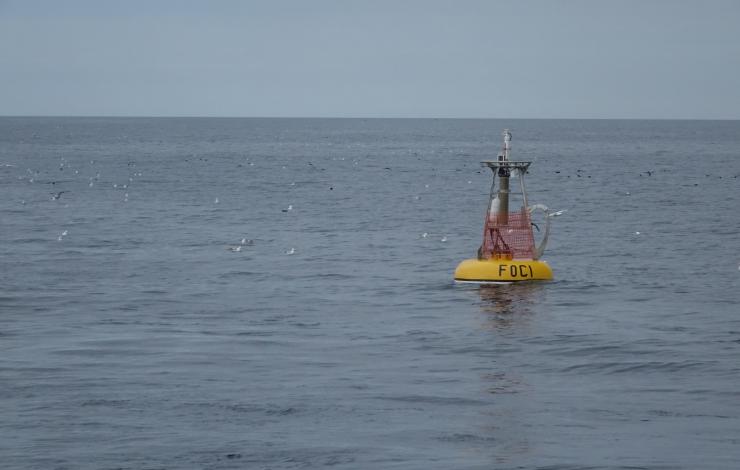 EcoFOCI maintains an array of four moorings on the southeastern Bering Sea Shelf that collect year-round measurements to better understand the mechanisms and changes that may impact the productive marine ecosystem.

The northern Bering and Chukchi Seas are among the world’s most productive ocean areas. They are home to millions of seabirds and marine mammals and vibrant Indigenous cultures. The region has also long been one of the fastest warming places on the planet. In a recnetly published paper in Nature Climate Change, a multi-disciplinary team of academic, government, and private sector scientists reports that dramatic changes in these Arctic ecosystems due to warmer ocean conditions. The scientific team, participating in a four-year Arctic Integrated Ecosystem Research Program, observed conditions more typical of subarctic ecosystems.

"The rate of change over the study timeframe came as a shock. Having a team with the expertise to put together the pieces across the whole ecosystem simply drives home how far-reaching the changes are and how much they matter," said Henry Huntington, lead author of the study.

Some key observations over the past several years of the study include:

The North Pacific Research Board, in cooperation with other organizations funded the Arctic Integrated Ecosystem Research Program. The goal of the program was to better understand the mechanisms and processes that structure the ecosystem and influence the distribution, life history, and interactions of biological communities in the Chukchi Sea.  Previous integrated ecosystem programs were undertaken in the Bering Sea and Gulf of Alaska.

The big question for scientists remains whether these changes reflect a new norm. Collaborative research efforts like this are important because they allow scientists to monitor changes as they are happening and provide meaningful information to local communities and resource managers so they are better able to respond and adapt.

The team of authors includes physical and biological oceanographers, ichthyologists, ornithologists, marine mammalogists, marine ecologists, and social scientists, from the University of Alaska Fairbanks, the University of Washington, the National Oceanic and Atmospheric Administration, the Alaska Department of Fish and Game, the North Slope Borough Department of Wildlife Management, the North Pacific Research Board, Stantec, and Huntington Consulting.