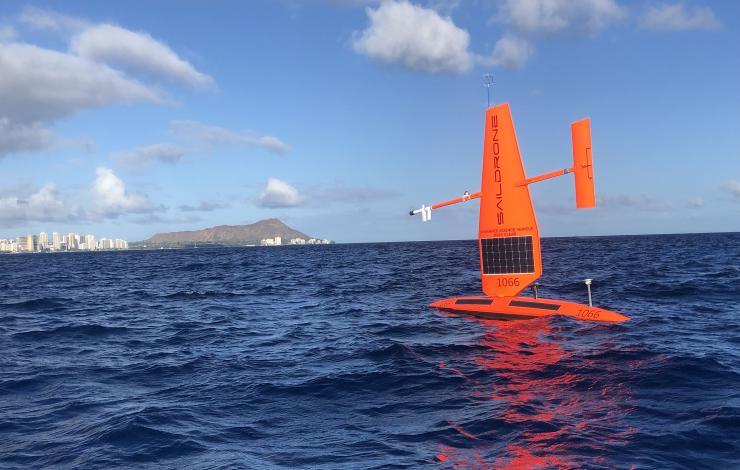 Saildrone uncrewed surface vehicles (USVs), like the one pictured here, made measurements of atmospheric cold pools in remote regions of the tropical Pacific. Credit: Saildrone, Inc.

Atmospheric cold pools over the tropical oceans produce large changes in air temperature and wind speed in the planetary boundary layer. But how they affect the larger atmospheric circulation is not clear. Cold pools are pockets of air cooler than the surrounding environment that form when rain evaporates under thunderstorms. These relatively dense air masses, ranging between 10 to 200 kilometers in diameter, lead to downdrafts that, upon hitting the ocean surface, produce temperature fronts and strong winds that impact the surrounding environment. To understand the role of cold pools in tropical convection, scientists need detailed measurements of these events; however, observations in hard-to-reach ocean locations have been lacking.

Uncrewed surface vehicles, or USVs, could be a solution. In a new study published in Geophysical Research Letters, scientists from the University of Washington and NOAA’s Pacific Marine Environmental Laboratory describe the use of Saildrone USVs, wind-propelled sailing drones with a tall, hard wing and solar-powered scientific instruments. Over three multi-month missions between 2017-2019, ten USVs covered over 137,000 kilometers and made measurements of over 300 cold pool events, defined as temperature drops of at least 1.5 degrees Celsius in 10 minutes. In one case, four USVs separated by several kilometers captured the minute-by-minute evolution of an event and revealed how the cold pool propagated across the region.

The Saildrone USVs measured variations in air temperature, wind speed, humidity, pressure, and sea surface temperature and salinity. Analysis of these variables revealed key features of cold pool events, including how much and how quickly air temperatures dropped, how long it took for wind speeds to reach their peaks, and the dynamics of sea surface temperature changes. The results can be used to evaluate mathematical models of tropical convection and explore more questions, like how gusts at cold pool fronts affect air-sea heat fluxes.

These missions are part of a larger effort to enhance the Tropical Pacific Observing System (TPOS) to improve long-term weather forecasts and better understand local and regional implications of global phenomena such as El Niño Southern Oscillation (ENSO), hurricanes, typhoons and marine heatwaves (e.g. the “Blob”).  An international team of scientists are working to rethink and refine the TPOS to build a more effective, modern and robust observing system to meet the observational, experimental, and operational needs of today and the future.