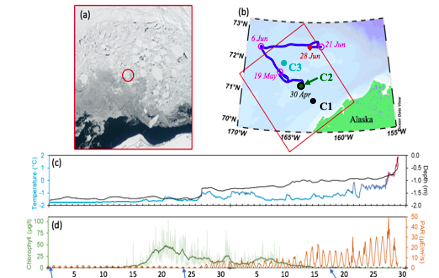 During the first Chukchi deployment, floats resurfaced under a sheet of floating ice (ice floe), monitored and tracked the ice region for almost two months and detected an under-ice algae bloom (Stabeno et. al, 2020).  The bottom row shows the captured images with no bloom and/or algae.

After spending 8 months under water and ice, two of NOAA’s three Arctic-deployed pop-up floats have successfully surfaced in the Chukchi Sea and are transmitting data on temperature, pressure, photosynthetic active radiation (PAR), and chlorophyll fluorescence. These data are from measurements taken while the float is anchored to the seafloor, while it rises through the water column, and while it is trapped under the ice at the water-ice boundary.

The two floats were initially deployed in the fall of 2020 by the scientists and crew of NOAA Ship Oscar Dyson. These are part of the 4th cohort of deployments since 2017, and the second cohort deployed in the Chukchi Sea.  The first float to surface has transmitted data from the four months it spent on the seafloor, just over a month of data from when it was trapped under ice, and about half of the photos it took while under ice. The second float has transmitted about five months of data from the seafloor, just over four months of data from under the ice along with the under-ice photos it captured, and 7 days of open ocean sea surface temperature.

Pop-up floats provide an inexpensive method to explore a unique micro-ecosystem under floating ice. The floats collect ocean health data to help researchers better understand the rapidly changing Arctic ecosystem. They collect data during the ice-covered winter and spring months, a time during which it isn’t possible for researchers to penetrate the ice from above to study the water underneath. The water column data they collect on their rise up from seafloor to surface is essential for researchers to monitor ongoing ecosystem changes in the Arctic, such as watching for harmful algal blooms and documenting biodiversity in the environment. The floats can also help researchers measure the extent of the cold pool, an area of cold water about 30 meters deep that results from melting Arctic ice from the previous season.

NOAA PMEL began development of these floats in 2015. The float is an orange sphere equipped with sensors to measure temperature, pressure, and other ocean conditions as well as cameras to capture under ice imagery. It is deployed during the ice-free summer months and anchors to the seafloor measuring bottom-ocean conditions. It stays here collecting measurements throughout the winter and early spring. It then rises up through the water column at a pre-programmed time, in this case early March to mid-April, capturing data at various depths to create a profile of the water column. The floats are then trapped under ice when it reaches the surface, and will continue collecting data and images of conditions at the water-ice boundary. When the ice melts in mid-May and early June, the floats can emerge fully from the ice to reach the surface and begin transmitting their stored data, while continuing to monitor sea surface temperature.

Read more about the 2020 pop-up deployments in Arctic Today and on the ITAE website.