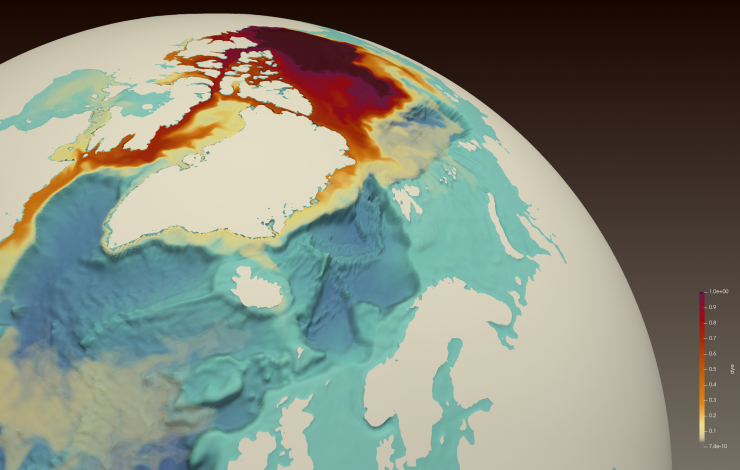 A simulated red dye tracer released from the Beaufort Gyre in the Arctic Ocean (center top) shows freshwater transport through the Canadian Arctic Archipelago, along Baffin Island to the western Labrador Sea, off the coast of Newfoundland and Labrador, where it reduces surface salinity. At the lower left is Newfoundland (triangular land mass) surrounded by orange for fresher water, with Canada’s Gulf of St. Lawrence above colored yellow. Credit: Francesca Samsel and Greg Abram (LANL)

The Beaufort Gyre in the western Arctic Ocean is the largest oceanic freshwater reservoir in the Northern Hemisphere. It has increased its freshwater content by 40% over the past two decades. The fate of the excess freshwater and how and where this water will flow into the Atlantic Ocean is important for local and global ocean conditions. A new paper in Nature Communications, researchers from the University of Washington, NOAA's Pacific Marine Environmental Laboratory and the Department of Energy Los Alamos National Laboratory, show that a historical release during 1983-1996 freshened the western Labrador Sea by as much as 0.2 parts per thousand. The results imply that a future release of the current high volume of Beaufort Gyre freshwater could even be more impactful.

This study is the first that quantifies the fate of the Beaufort Gyre freshwater after it is released and its downstream impact. The study shows that this freshwater travels through the Canadian Archipelago to reach the Labrador Sea, rather than through the wider marine passageways that connect to seas in Northern Europe. The results are based on passive tracers implemented in a global intermediate-resolution ocean sea-ice model, which is performed at the High Performance Computing facility at Los Alamos National Laboratory.

“The Canadian Archipelago is a major conduit between the Arctic and the North Atlantic,” said lead author Jiaxu Zhang, a UW postdoctoral researcher at the Cooperative Institute for Climate, Ocean and Ecosystem Studies who began this work at Los Alamos National Laboratory. “In the future, if the winds get weaker and the freshwater gets released, there is a potential for this high amount of water to have a big influence in the Labrador Sea region.”

The finding has implications for the Labrador Sea marine environment, since Arctic water tends to be fresher but also rich in nutrients. This pathway also affects larger oceanic currents, namely a conveyor-belt circulation in the Atlantic Ocean in which colder, heavier water sinks in the North Atlantic and comes back along the surface as the Gulf Stream. Fresher, lighter water entering the Labrador Sea could slow that overturning circulation.

“We know that the Arctic Ocean has one of the biggest climate change signals,” said co-author Wei Cheng at the UW-based Cooperative Institute for Climate, Ocean and Atmosphere Studies. “Right now this freshwater is still trapped in the Arctic. But once it gets out, it can have a very large impact."

The exact impact is unknown. The study focused on past events, and current research is looking at where today’s freshwater buildup might end up and what changes it could trigger.