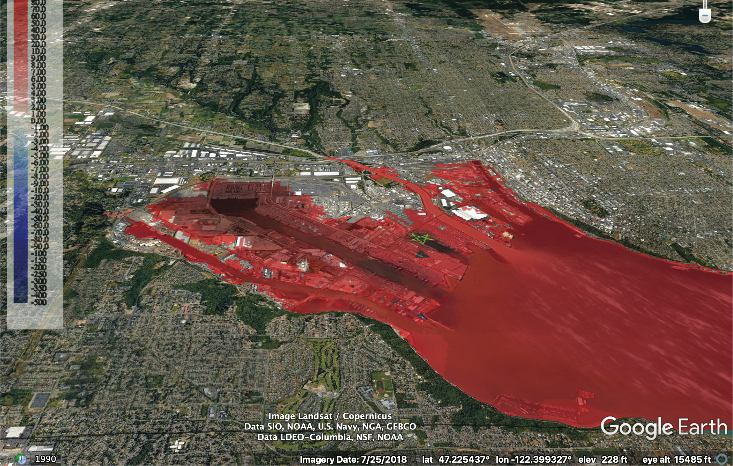 Tsunami test scenario for Bellingham (upper panel) and Tacoma (lower panel) forecast models. Tsunami amplitudes and inundation (red) are shown for the same M9.0 scenario of the Cascadia tsunami 3 hours after tsunami generation. Click on image to see both panels. These figures do not represent an actual forecast or quantitative hazard assessments for Tacoma and Bellingham, these are rather a test simulation of a potential tsunami scenario to verify the robustness of the forecast models. 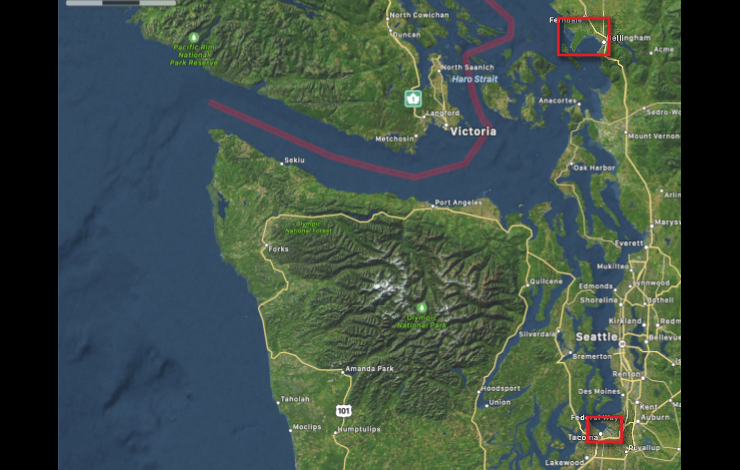 The main tsunami hazard for Washington State originates from a potential earthquake at the Cascadia Subduction Zone, which is stretched along the U.S. Pacific coasts offshore Washington, Oregon and Northern California. The main impact during such a tsunami event would be the ocean-side communities on the open coast. However, Washington State’s main population centers are located along Puget Sound, a long narrow inlet over 100 miles away from open coast and from potential Cascadia earthquake.

Recent tsunami mapping and tsunami hazard modeling efforts of the National Tsunami Hazard Mitigation Program have demonstrated that a Cascadia tsunami impact could be significant even for the coasts deep inside Puget Sound. Due to this need, the NOAA Center for Tsunami Research (NCTR) at PMEL developed high resolution tsunami inundation forecast models for Bellingham and Tacoma, Washington. These high-resolution community models are needed to improve the accuracy of the tsunami forecasts at NOAA’s Tsunami Warning Centers. Since 2012, NCTR has developed over 75 high-resolution inundation forecast models for the most vulnerable U.S. coastal communities and that number continues to grow.

While the tsunami wave amplitudes in Bellingham and Tacoma are expected to be lower in comparison with the outer coast communities during a Cascadia tsunami, the population density and potential local tsunami-genic faults within Puget Sound make these two cities high tsunami risk. Seattle would also see some impact but was not found to be as high risk from tsunami inundation as Tacoma or Bellingham.

The development of the Tacoma and Bellingham models included extensive testing with available historical tsunami data and included the dynamics from major harbor structures such as breakwaters. The forecast  models are also constrained by run time and are developed to run in less than a minute. Figure 2 shows an example of model testing results, depicting snapshots of tsunami amplitudes for a Cascadia tsunami simulation 3 hours after a generated tsunami event. Tacoma wave amplitudes may reach above 5 meters for this scenario, while Bellingham shows above 4 meters of amplitudes for this scenario.

These models have been incorporated into real-time forecasting at the NOAA Tsunami Warning Centers. Prior modeling efforts used worst case scenarios and long-running higher resolution models for WA state emergency managers to develop evacuation plans for a Cascadia tsunami event.

NCTR is an integral part of the NOAA Tsunami Program and is involved in several tsunami hazard mitigation and risk reduction research programs with federal, state and international partners.

Read more about the methods and details about the forecast system here.