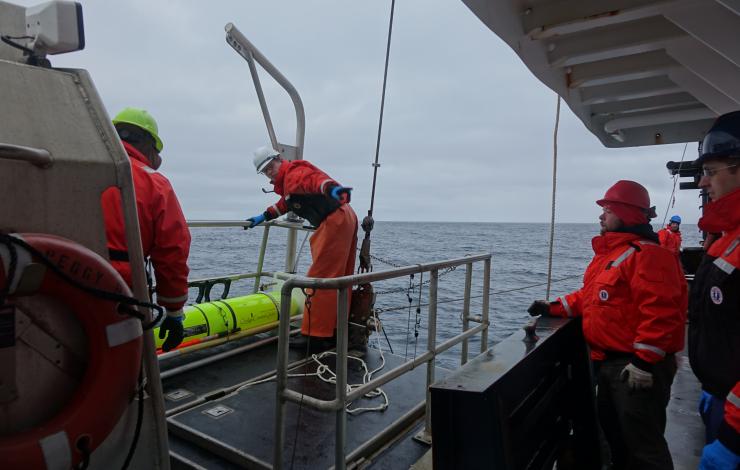 Oculus Coastal Glider being recovered by the crew of the NOAA Ship Oscar Dyson.

After 60 days in the Bering Sea, the Oculus Coastal Glider was successfully recovered by crew of the NOAA Ship Oscar Dyson on September 26, 2017. The glider successfully navigated 242.8 nautical miles, completed 3612 dives, and sampled salinity, temperature, dissolved oxygen, sunlight, and fluorescence at a frequency of approximately 3 dives per hour. The glider was tested in a region with a long history of shipboard and mooring observations that provide context for the Oculus glider's observations. Oculus glider measurements reveal detailed information in a known, important biogeographical transition that divides the ecosystems of the northern and southern Bering Sea shelf near St. Matthew Island.  Measurements show unexpected ocean mixing in the water column near the island that may be due to internal waves. Data, sensor, and platform analysis is ongoing. Incorporating this higher resolution sampling into the Bering Sea observing network will improve our understanding of how these features affect the ecosystem.

The Oculus is a coastal glider engineered to work in the highly stratified, shallow depths of the Arctic. By using a rapid buoyancy system, the glider can change buoyancy states 20 times faster and achieve speeds three times faster than legacy gliders - allowing for a more efficient and adaptive Arctic survey, but transferable to a variety of markets.

This was the second field test for the Oculus coastal gliders. The first field test occurred early May 2017, also in the Bering Sea, with 387 dives completed near the M2 mooring site. For the second field test, the glider was deployed from the US Coast Gaurd Cutter Healy during the 2017 Arctic Shield mission.