Ocean acidification is spreading rapidly in the Arctic Ocean 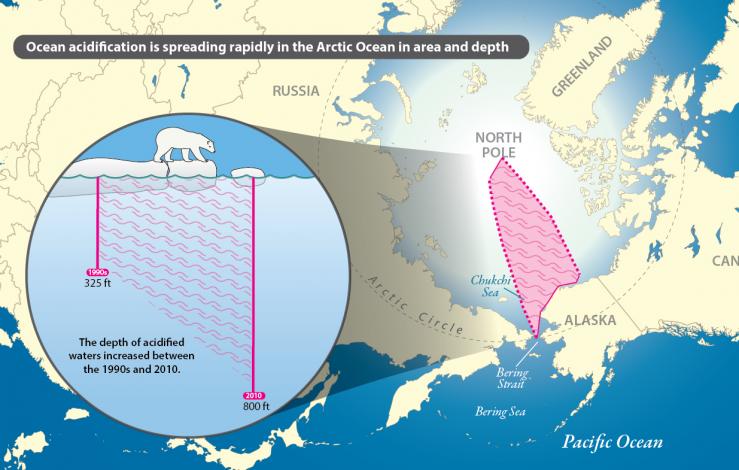 This map shows the extent of the research cruises conducted from 1994-2010 along with the spread of ocean acidification into deeper waters. Graphic Credit: Tammy Beeson/University of Delaware

New research published today in Nature Climate Change shows that ocean acidification is spreading rapidly in the western Arctic Ocean in both area and depth, potentially harming shellfish, other marine species in the food web and people who depend on these resources.

This research shows that between 1994 and 2010, acidified waters expanded northward approximately 300 nautical miles from the Chukchi Sea slope off the coast of northwestern Alaska to just below the North Pole. Also, the depth of acidified waters increased from approximately 325 feet to over 800 feet (or from 100 to 250 meters). The international research team determined the saturation state for aragonite, a carbonate mineral that marine organisms need to build shells, from water samples taken in the Arctic during cruises by the Chinese ice breaker XueLong (meaning “snow dragon”) in the summers 2008 and 2010, and during three other cruises. This research results showed that the Arctic Ocean is undergoing a rapid and large-scale increase in acidification, at least twice as fast as that observed in the Pacific or Atlantic oceans.

NOAA PMEL’s Richard Feely is a co-author on the paper led by China’s Key Laboratory of Global Change and Marine-Atmospheric Chemistry of State Ocean Administration, Xiamen, China, and the University of Delaware.

Read more on NOAA.gov and the University of Delaware's Press Release here. Learn more about PMEL’s Carbon Program on their website here.