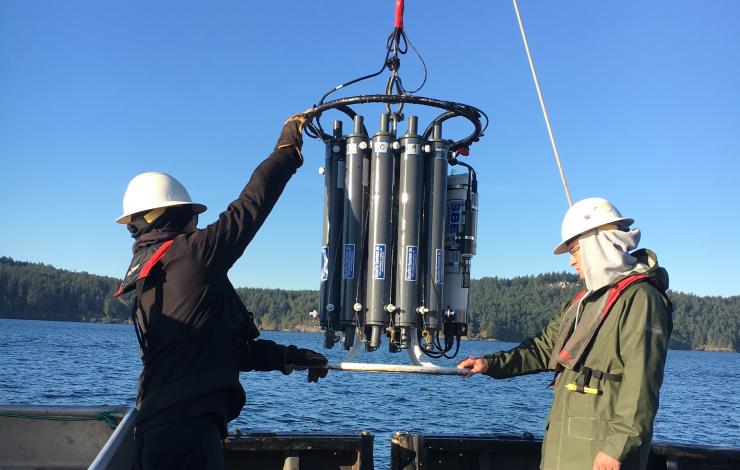 A new report details the effects of a changing climate on Puget Sound in 2018, and describes how these changes trickled down through the ecosystem to affect marine life and seafood consumers. Since 2011, Puget Sound Marine Waters has compiled data from numerous environmental monitoring programs to report on the state of Puget Sound’s marine waters during the previous year.

In 2018, Puget Sound witnessed the effects of a changing climate. Total annual rainfall was near normal for 2018, but the Puget Sound experienced a wetter than normal spring, followed by a record-setting summer drought. These conditions resulted in waters that were warmer and saltier than past averages and had lower oxygen levels. Scientists observed unusually warm water temperatures, though not as hot as during the years of “the Blob,” the marine heatwave of 2014-2016. Salinity went up everywhere in the Puget Sound through the summer and fall, in response to the record-setting summer drought. Hypoxia (a lack of oxygen) was more apparent in 2018 than previous years, though no fish kills were reported. Scientists reported lower numbers of fish, seabirds, and marine mammals, including continuing declines in endangered Southern Resident killer whales.

Atmospheric carbon dioxide (CO2) measured off the coast and in Puget Sound continued its annual increase, with coastal values near the global average and Puget Sound values in excess. In stratified basins, CO2 concentrations in surface seawater are quite different from those measured at depth. Levels potentially conducive to hypercapnia (harmfully high CO2) were present in the deep waters of Whidbey Basin and Hood Canal during 2018. Atmospheric measurements of the mole fraction of carbon dioxide (xCO2) at the Ćháʔba· and Cape Elizabeth moorings on the Washington shelf continued their year-to-year increases in 2018, and were similar to the global averages. The summertime minimum was earlier at Cape Elizabeth in 2018 relative to other years. 2018 surface seawater xCO2 values at Ćháʔba· and Cape Elizabeth were within the range of past years.

The Puget Sound Ecosystem Monitoring Program’s Marine Waters Work Group, who authored the report, has been tracking the health of Puget Sound since 2011. This work group includes scientists from federal, tribal, state and local agencies, academia, nonprofits, and private and volunteer groups.

The work group looked at several environmental indicators, including plankton, water quality, climate, and marine life, that, when considered together, provide both a long-term view and current assessment of the Sound’s health.