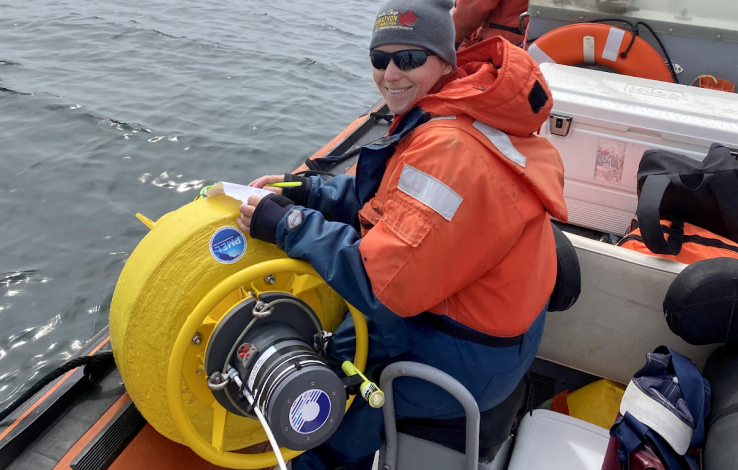 Reviewing checklist and final preparations to deploy drifting hydrophone buoys off the coast of Oregon.

A new video highlighting PMEL's acoustics research and eDNA innovations to study Blue Whales off the coast of Newport, Oregon has been released in the “PMEL at Work”  YouTube series.

Over the summer of 2021, PMEL and OSU CIMERS scientists field tested three passive-acoustic hydrophones to identify and locate blue and fin whales. These new smart hydrophones have an internal microprocessor that communicates the location of the buoys to shore. PMEL developed software for the microprocessor that will analyze the hydrophone data using a blue whale call detection algorithm. The goal for this algorithm is to register a positive blue call detection and transmit this positive detection information, as well as the position of the buoy, via satellite communication to shore to let scientists know when and where a blue whale call is recorded. When a call is detected on multiple buoys, the shore based scientists can then determine the location of the calling whale, and then inform the ship’s crew that a blue whale is nearby. The location of the whale will be correlated with the results from collected eDNA samples.

This past summer was a successful field test of the hydrophone buoys in anticipation for upcoming fieldwork in the summer of 2022 where PMEL will simultaneously collect acoustic recordings and eDNA samples of blue whales off the Oregon coast. This project will improve interpretation of eDNA results by using a time-series sampling method combined with acoustic detection for tracking and localizing highly migratory whale species in remote open ocean habitats.

This is a collaborative project between Oregon State University Marine Mammal Institute and Cooperative Institute for Marine Ecosystem and Resources Studies (CIMERS) and NOAA.

The PMEL at Work video series highlights ongoing research activities and projects supporting NOAA’s mission to understand changes in the global ocean and its impact on climate, weather and ecosystems.