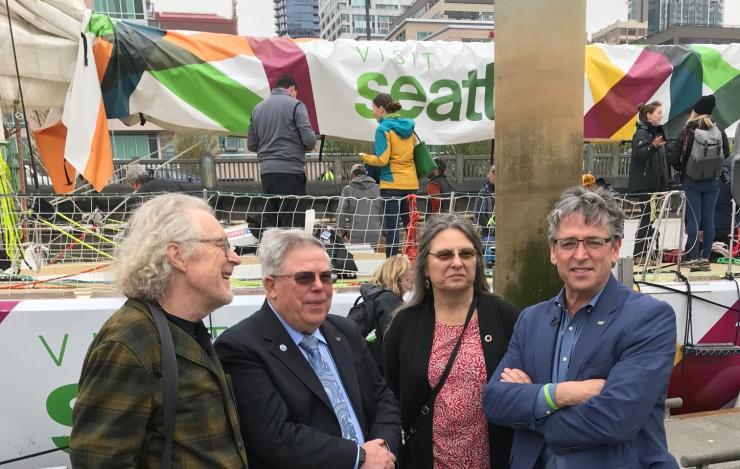 Video above from Clipper Round the World on the research. Image from left to right: Peter Knutson, Fisherman and Owner of Loki Fish Company, PMEL's Richard Feely, UW researcher Jan Newton, Port of Seattle Commissioner Fred Felleman in front of the Visit Seattle racing yacht at a recent press event.

The Clipper Round the World Race has partnered with the Port of Seattle, University of Washington, NOAA, Visit Seattle and Sunburst Sensors to undertake pioneering scientific research into the global impacts of ocean acidification. This research will contribute to a world-wide database and be used to raise public awareness on this issue.

The Visit Seattle, one of the Clipper Race’s eleven identical 70 foot ocean racing yachts, has been fitted with a new Sunburst Sensors underway pH sensor. Sunburst Sensors is the recent winner of a $2 million XPRIZE ocean health award and will test the new pH sensor as the vessel sails the 6,000 nautical mile seventh leg of the race along the US Coast.

Port of Seattle Commissioner, Fred Felleman, who initiated the effort, spoke at a recent press event about the importance of monitoring the waters around the North American coast, saying: “Pacific Northwest waters are particularly vulnerable to ocean acidification - impacting numerous species of ecological and economic importance, from plankton to pollock, oysters to orcas. It also impacts tenants at Fishermen’s Terminal who are an essential part of Seattle’s cultural fabric and economic diversity.

This collaboration with the Clipper Round the World Yacht Race is testing new equipment that could eventually expand the reach of current monitoring efforts and provides a spectacular platform to take this important message to a global audience.

The University of Washington and NOAA PMEL will help to evaluate the data that is obtained during the cruise. One major impact of ocean acidification is the inhibition of calcifying organisms to form their shells.  These impacts are not limited to oysters and mussels but also include small planktonic organisms, known as pteropods which are food for herring, salmon, pollock and other fish species of ecological and economic importance.