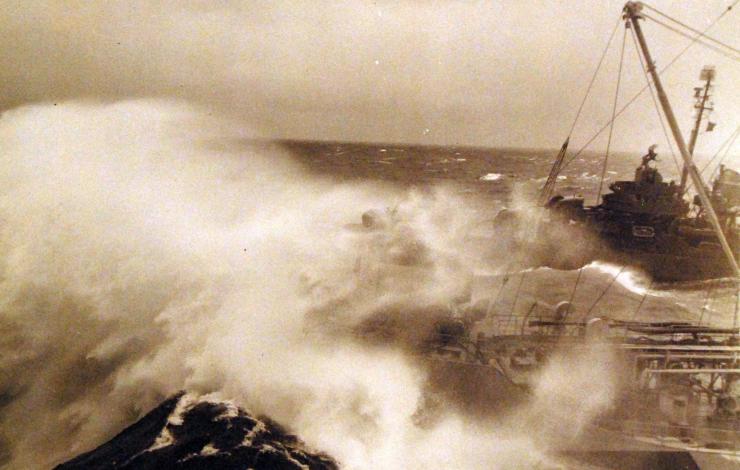 US Ship Pamansett and a destroyer in heavy seas in the East China Sea, 17 January 1945.

A new Old Weather project is now available on the Zooniverse citizen-science platform recovering weather data collected by U.S. Navy ships during World War II (1941-1945) that will drive sophisticated computer models used to reconstruct past weather events and improve future global climate projections. New information gathered through this project will also help uncover the source of a mysterious anomaly in sea-surface temperatures measured during the war. This distortion, known as the World War II Warm Anomaly, is large enough to affect the long-term global mean sea-surface temperature record, and ultimately impacts how we understand climate variability over longer time periods.

It is currently thought the warm ocean temperatures that appeared during World War II are not actually real, but arise due to changes in the way sea-surface temperatures were collected and then compiled into the digital data sets we use today. A critical barrier to verifying and quantifying the effect of different sampling methods used during this period has been the limited access to the original logbooks kept aboard every Navy ship.

Fortunately, most of the ships’ deck logs and war diaries have been preserved by the U.S. National Archives; these have gradually been digitized and published online via a longstanding collaboration with NOAA and the University of Washington’s Cooperative Institute for Climate, Ocean & Ecosystem Studies (CICOES). Online access and Old Weather citizen-scientists’ transcriptions enable entirely new analyses of the marine weather data collected by the Navy during World War II and even as far back as the 1850s.

The ship logbooks being transcribed via the Old Weather – WWII project were chosen not only to provide new-to-science data for the world’s climate data bases, but specifically to help answer questions about the nature of the data itself during this period. The selected ships are representative of the main classes of warship that were in use, and they share some particular characteristics. The most important – these ships were operating together, often within sight of each other, through much of the war. Twelve of the ships were based at Pearl Harbor in 1941, eighteen were in the Aleutian Islands in 1942-1943, and ten were caught in Typhoon Cobra in December 1944. Their proximity in time and space will allow us to investigate for the first time underlying factors associated with the weather data: the potential effect of different ship types, the different weather instruments in use, and changes in methods required by wartime operations, such as darkened ship (blackout).

Once analyzed, these data will allow the research team to quantify the impact of data collected by the Navy during World War II on the global sea-surface temperature record. If the current hypothesis that the warm anomaly is not physical is shown to be correct, the bias-adjusted temperature record would then appear to rise more smoothly through the 20th century. Reconstructions of the atmosphere produced by retrospective analysis (reanalysis) that depend on historical data would also be improved.

Follow along on Zooniverse and the Old Weather Blog.