Monitoring Change in the Arctic: Expedition to the U.S. Arctic keeps in place some vital research 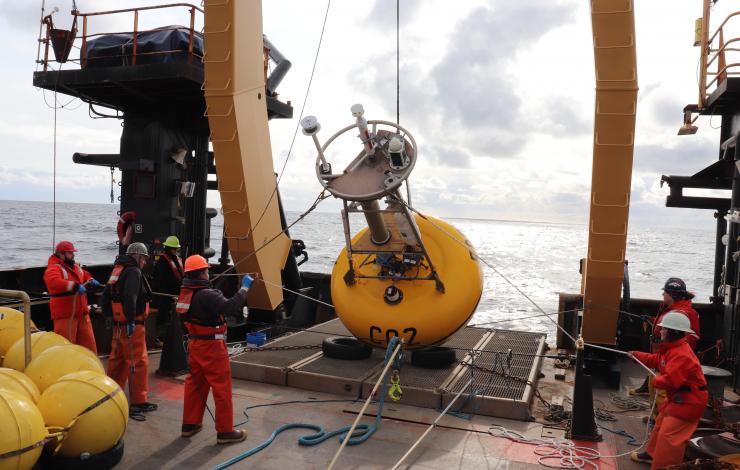 From spring to early fall in a typical year, NOAA and research partners conduct several important scientific surveys in the U.S. waters of the Bering and Chukchi Seas. Scientists collect oceanographic and biological data that are used to inform fisheries management, monitor whale populations and support Arctic ecosystem and climate studies.

This annual research is essential to understanding a rapidly changing Arctic.

But this was no usual year due to the COVID-19 pandemic. While NOAA has had to cancel many of its planned research surveys in Alaska, it has been able to conduct a number of scaled-back research surveys in 2020. One such survey that will be finishing up this week is in the Arctic and was conducted on board NOAA Ship Oscar Dyson to collect critical data supporting a long time series involving many scientific partners.

With the help of the Oscar Dyson’s crew, which has gone above and beyond their normal duties to assist the scientists during the survey and ensure the continued collection of data, scientists are retrieving and deploying some of the moorings that gather data year-round in the Bering and Chukchi Seas. These moorings are equipped with sensors to collect measurements of nutrients and oceanographic conditions (including currents, temperature, salinity, oxygen, and fluorescence) to better understand the health of this marine ecosystem and how it may be changing. Some of the mooring sites have been operating continuously for more than 20 years and provide critical ocean measurements during the ice-covered winter and spring months.

The science team and Oscar Dyson survey team are also collecting physical, chemical and biological water column data in an effort to document ongoing ecosystem changes in the U.S. Arctic. The science team is also sampling the water column for phytoplankton, single-celled plants, in order to monitor harmful algal blooms and are collecting environmental DNA from water samples to document the biodiversity present in the environment.

Scientists at the Alaska Fisheries Science Center also hope to retrieve passive acoustic data from year-round moorings to learn more about where whales move throughout the year. Of particular interest is how whales responded to a more typical, colder winter in 2019 than the extremely warm conditions during the previous two years.

The survey team deployed new pop-up floats for NOAA’s Pacific Marine Environmental Laboratory to map the “cold pool”. The cold pool is a layer of cold bottom water (less than 35°F (2 °C) at approximately 98 feet (30 meters), which results from melting sea ice in the previous winter and spring, and plays a key role for the Bering Sea ecosystem. It can act as a corridor for Arctic fish species and a barrier for sub-Arctic species. The cold pool can restrict movement of commercially important walleye pollock and Pacific cod into northern waters. In the past few years, the cold pool has been markedly smaller, allowing large-scale northward expansions of typically sub-Arctic fish, crab and zooplankton into the Bering Sea.

“What is really remarkable about this survey is that scientists and crew are stepping forward to collect data for fellow scientists who aren’t able to get out this year,” said Phyllis Stabeno, NOAA PMEL oceanographer. “It’s a great example of teamwork at its best.”

Read more about the research cruise on NOAA Research.