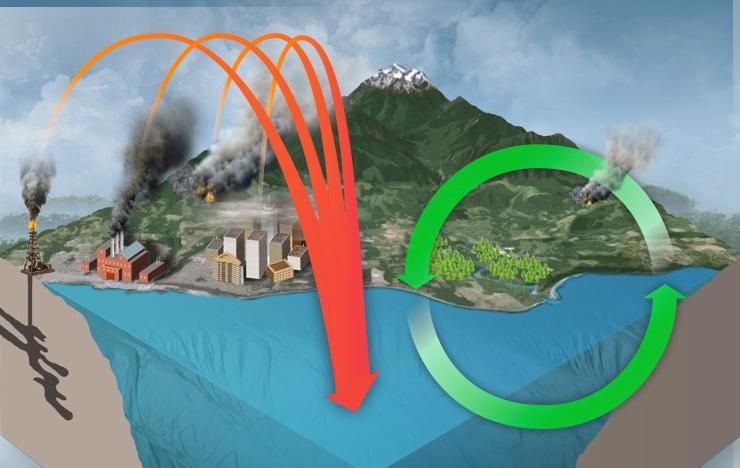 Prior to the industrial revolution CO2 was absorbed from the air by land plants, exported via rivers to the ocean and released back into the air creating a balanced cycle on time scales of centuries to millennia. Today, humans are altering this balance by releasing fossil carbon (e.g. coal, oil, natural gas). About one third of fossil CO2 is absorbed by the ocean, changing the ocean from a net source to the air, to a net sink.

Recent results published by the Global Carbon Project (GCP) earlier this month in Earth System Science Data show that global carbon emissions from burning fossil fuels did not grow in 2015 and are projected to rise only slightly in 2016, marking three years of almost no growth. The plateau in global emissions is largely the result of reduced coal use in China. However, emissions grew by 5.2% in 2015 in India, the world’s second most populous developing country, and other developing countries.

In spite of a nearly flat growth in emissions, the growth in atmospheric CO2 concentration was a record-high in 2015 and could be a record high again in 2016 due to weak carbon sinks. Carbon sinks refers to a reservoir that accumulates and stores carbon. Natural sinks are in the oceans and land plants, which typically absorb more carbon dioxide than they release. This past year, CO2 was not as readily absorbed by trees due to warm and dry conditions over tropical land caused by the recent 2015-16 El Niño event.

Atmospheric CO2 levels have exceeded 400 parts per million (ppm) and will continue to rise until emissions are reduced to near zero. This is the highest level for atmospheric CO2 in at least the last 800,000 years (See GCP Infographics for more details here).

PMEL scientists, Simone Alin, Adrienne Sutton, and Kevin O’Brien provided valuable data about CO2 in the oceans for this report. The Global Carbon Project was formed to develop a complete picture of the global carbon cycle, including the interactions and feedback between the natural and human systems.