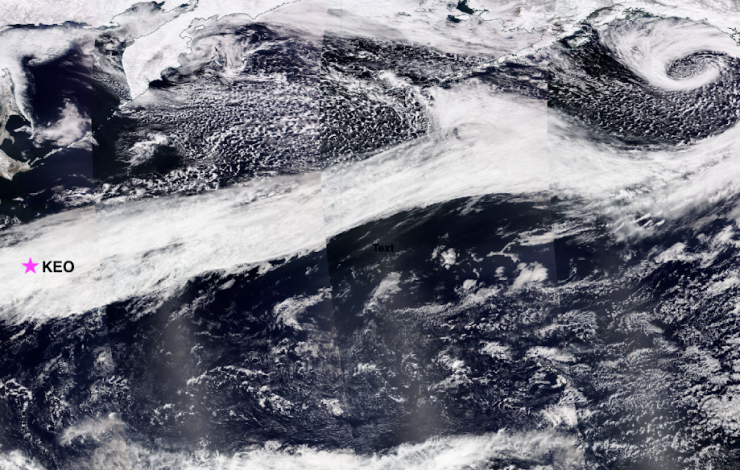 The KEO moored buoy (pink star) was deployed just in time to observe an intense atmospheric river (as shown in the satellite image) that connected the western Pacific to the east and brought stormy weather and heavy precipitation to the Pacific Northwest. Click on image to see full image. Cloud image created from worldview.earthdata.nasa.gov 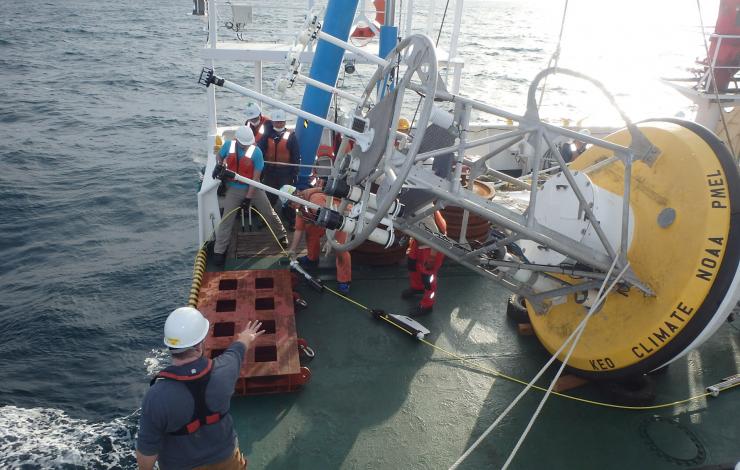 March 31, 2022: The Kuroshio Extension Observatory (KEO) moored buoy was successfully deployed by NOAA PMEL and partners, renewing an ongoing OceanSITES time series that began almost 18 years ago. First deployed in 2004, its time series was disrupted by the COVID pandemic. KEO collects vital data in the Kuroshio Extension recirculation gyre, a region known to affect the development of storms over the North Pacific before they reach the United States.

The deployment was just in time for KEO to capture the air-sea interaction process underneath an intense atmospheric river that connected the western Pacific to the east and brought stormy weather and heavy precipitation to the Pacific Northwest.

KEO carries sensors for NOAA PMEL and partners from Japan and US academic institutions that measure surface air-sea heat and momentum fluxes, along with various oceanographic variables in the upper 525 meters and near the seafloor. New this year, the KEO-2022 mooring includes dissolved oxygen sensors, a nitrate sensor, and a testbed for new biodegradable “plastic-alternative” materials from the Japan Agency for Marine-Earth Science and Technology (JAMSTEC), the University of Washington-Applied Physics Lab’s bubble and acoustic observations, and a moored CO2 system.

KEO will also play a critical role in the Japanese national program “Middle-latitude atmosphere-ocean interaction hotspot in a changing climate system” (HotSpot-2), as an ocean observatory by providing a reliable platform for new sensors and the long-term, large-scale context of intensive field campaign observations.

Learn more about the research part of the Ocean Climate Stations program: https://www.pmel.noaa.gov/ocs/KEO

This work is funded by NOAA’s Global Ocean Monitoring and Observing Program to sustain in situ global ocean observations and information in support of research, monitoring, and prediction.