Key Climate Mooring Off the Coast of Japan Successfully Recovered 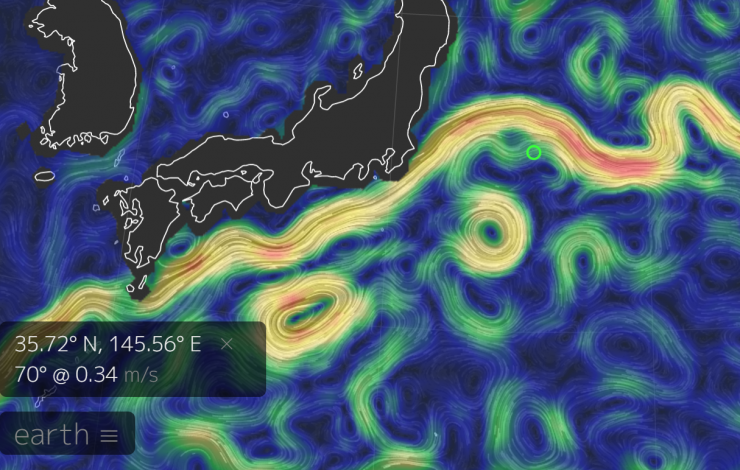 The KEO mooring (green circle) shown on a map of surface currents with eddies mixing along the Kuroshio Extension Current which carries warm water at nearly 140 million cubic meters per second eastward into the North Pacific.

The surface mooring at the Kuroshio Extension Observatory (KEO), which broke away from its anchor on May 19, was recovered on July 21 by the Japanese charter ship, Kaiyo. Despite being caught in eddies and an ocean jet, the drifting KEO buoy, its sensor suite and nearly 8 kilometers of mooring line was recovered. Due to travel restrictions associated with COVID19, there were no NOAA personnel onboard the Kaiyo for this rescue. This mission relied on a large contingent for its success, including the assistance of engineers, technicians and administrative staff at NOAA’s Pacific Marine Environmental Laboratory (PMEL), funding from NOAA Research’s Global Ocean Monitoring and Observing (GOMO), partners at the Japan Agency for Marine-Earth Science and Technology (JAMSTEC), and the Kaiyo captain and crew.

The KEO station is located off the coast of Japan. NOAA has maintained a surface mooring there since 2004, and JAMSTEC has maintained a subsurface sediment trap at KEO since 2014. The KEO surface mooring carries a suite of instrumentation to monitor air-sea exchanges of heat, moisture, momentum (wind stress), and carbon dioxide; surface ocean acidification; and upper ocean temperature, salinity and currents. This region has some of the largest air-sea heat and carbon dioxide fluxes in the world’s ocean. The KEO station is an important reference data set for assessing satellite observations, numerical weather prediction and climate models.  Its data are being used worldwide to better understand weather, climate, and the carbon cycle.