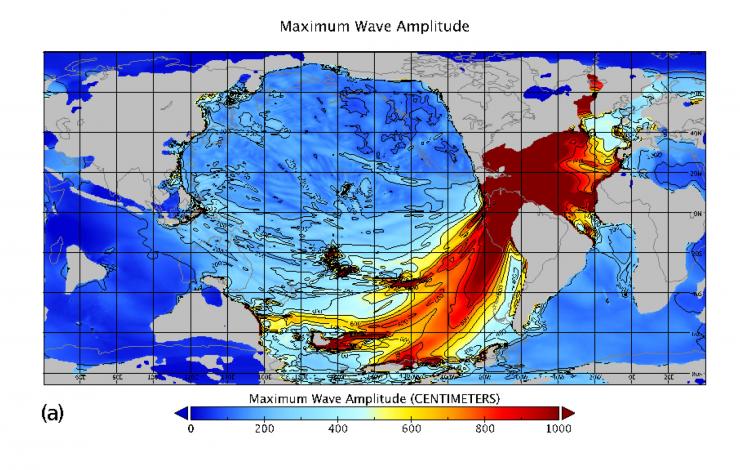 The 6+ miles-wide asteroid that struck Earth 66 million years ago wiping out nearly all the dinosaurs and roughly three-quarters of the planet’s plant and animal species also triggered a megatsunami with mile-high waves that new research confirms its global impact.

A new study, published today in the journal AGU Advances, presents the first global simulation of the Chicxulub asteroid impact tsunami. An international group of researchers from academic institutions and government agencies, including NOAA’s Pacific Marine Environmental Lab and Geophysical Fluid Dynamics Lab combined numerical modeling and analysis of geological records to recreate global impact of the tsunami generated by the impact.

Simulation of the megatsunami triggered by the asteroid has provided unlikely verifications for numerical models and improves our understanding of the geology of this period.

Numerical analysis of the event used three different models to reproduce tsunami generation and propagation. A large computer program that models details of complex fluid flows, called a hydrocode,  simulated the first 10 minutes of the tsunami generation, and two NOAA-developed models were then used to simulate the tsunami propagation around the global ocean. Additionally, the research team reviewed the geological record at more than 100 sites worldwide and found evidence that supports the models’ predictions of the tsunami’s path and power – a remarkable verification of the model for the megatsunami event of 66 million years ago.

“This tsunami was strong enough to disturb and erode sediments in ocean basins halfway around the globe, leaving either a gap in the sedimentary records or a jumble of older sediments,” said lead author Molly Range, who conducted the modeling study for a master’s thesis at the University of Michigan.

The study authors calculated that the initial energy in the tsunami was up to 30,000 times larger than the energy in the December 2004 Indian Ocean earthquake tsunami, which killed more than 230,000 people and is one of the largest tsunamis in the modern record.

“Our study is the first estimate of the global impact of the tsunami generated by the Chicxulub asteroid,” said Vasily Titov, co-author of the study. ”The models estimate that virtually all world coastlines experienced catastrophic flooding from that tsunami.”

Depending on the geometries of the coast and the advancing waves, most coastal regions would be inundated and eroded to some extent.

The team’s simulations show that in some deep-water basins of the North Atlantic, the Pacific and in some adjacent areas, underwater current speeds likely exceeded 20 centimeters per second (typically less than 1 cm per second for an earthquake-generated tsunami), a velocity that is strong enough to erode fine-grained sediments on the seafloor.

In contrast, the South Atlantic, the North Pacific, the Indian Ocean and the region that is today the Mediterranean were largely shielded from the strongest effects of the tsunami, according to the team’s simulation. In those places, the modeled current speeds were likely less than the 20 cm/sec threshold.

“We found corroboration in the geological record for the predicted areas of maximal impact in the open ocean,” said Brian Arbic, co-author and physical oceanographer at University of Michigan . “The geological evidence definitely strengthens the paper.”

Any modern documented tsunamis pale in comparison with this global catastrophic event, about 30,000 times smaller than this megatsunami. This study helps to assess and quantify the risk of future large asteroid impacts. In addition, the ability to reproduce mega-events like this is an important validation for the models to be able to forecast global impacts of more conventional tsunamis that humanity has to deal with.