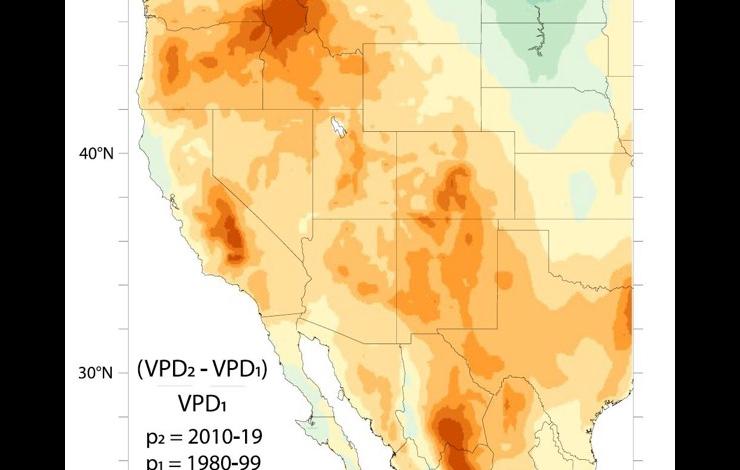 The research study calculated the percent change from the ’80s and ’90s to the 2010s in the nighttime vapor pressure deficit, a measure of the drying power of the air, during summer months. Nighttime conditions were much more conducive to drying in recent years, especially in California’s central valley and the Bitterroot-Blue Mountain region of Idaho and surrounding states. Chiodi et al. 2021/Geophysical Research Letters 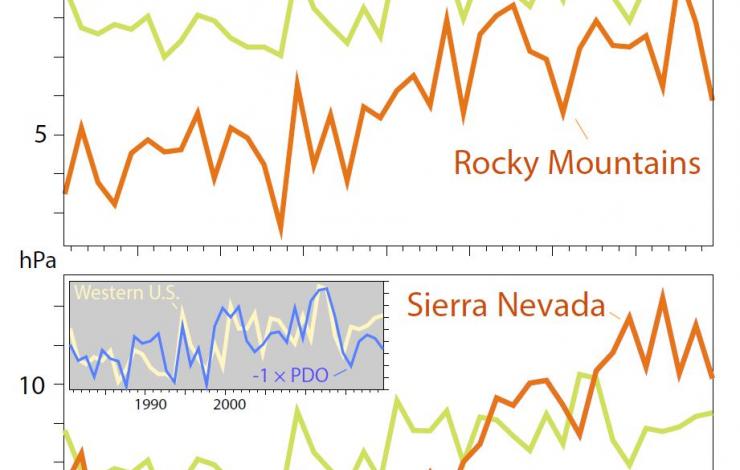 Focusing on the two areas with the biggest change in nighttime air — the Northern Rockies (orange line at top) and the southern Sierra Nevada (orange line at bottom) — shows much bigger changes in summer nighttime vapor pressure deficit than the average across the West (green line). The study finds a link between the average value across the West and the Pacific Decadal Oscillation, a long-term climate pattern shown in the inset.

Firefighters have reported that Western wildfires are starting earlier in the morning and dying down later at night, hampering their ability to recover and regroup before the next day’s flareup.

A study by NOAA Cooperative Institute at the University of Washington and U.S. Forest Service scientists shows why: The drying power of nighttime air over much of the Western U.S. has increased dramatically in the past 40 years. The paper was published online in July in Geophysical Research Letters.

“Nighttime is an important time in fire management. When fires die down at night it gives firefighters a chance to rest, move equipment and strategize. The problem firefighters are reporting is an unexpected increase in nighttime fire activity,” said lead author Andy Chiodi, a UW research scientist at the Cooperative Institute for Climate, Ocean & Ecosystem Studies and at NOAA's Pacific Marine Environmental Laboratory . “Our findings support that this has been going on over the last 40 years over much, but not all, of the Western U.S.”

Earth’s atmosphere is warming due to climate change, and warming in many places has been greater at night. Warmer night air had been suspected as the culprit altering the daily pattern of wildfire activity, with burns continuing later into the night. The new study, however, shows it’s not just that the night air is warmer, but also a dramatic shift from 1980 to 2019 in its drying power — how much moisture the nighttime air can carry away from the fuels — over much of the Western U.S. This shift is not captured in climate models, and the authors say it could be related to natural long-term cycles rather than to climate change.

“We paid special attention to the change in recent years compared to the conditions seen in the ’80s and ’90s, which is when many of the current firefighters started their careers, and presumably formed their ideas about what normal fire behavior should look like,” Chiodi said. “We tried to quantify the changes that we were hearing about from firefighters.”

The study looks at the “vapor pressure deficit,” or the difference between the moisture in the air and the saturation moisture level at that air temperature. This difference is a measure of the air’s drying power.

“In the southern Sierra Nevada, the average summer nighttime vapor pressure deficit for the recent decade was 50% higher than the average in the ’80s and ’90s,” Chiodi said. “I was surprised — it’s unusual to see geophysical data change that dramatically.”

Some of this shift in vapor pressure deficit is happening because warmer nighttime air, caused by climate change, produce higher saturation values. But part of the drying power is happening because the nighttime air in some regions has less moisture, and that effect is not predicted by climate change models, at least this much or in this pattern. The authors find a possible connection to the Pacific Decadal Oscillation, a long-term cycle that can influence inland weather.

The increased drying power of nighttime air is especially pronounced in California’s San Fernando Valley and in the Bitterroot-Blue Mountain Region — including parts of the Idaho Panhandle, southeast Washington, northeast Oregon and western Montana.

“Firefighters had been saying for several years that they feel some fires burn later into the evening than they used to,” said co-author Brian Potter at the U.S. Forest Service’s Pacific Wildland Fire Sciences Laboratory. “We found that in some areas, the amount of water in the air is decreasing, sort of doubling up on the warmer nights. These areas, including where the Snake River Complex and Lick Creek fires are burning right now, are much more likely to have fires burn late into the night.”

The analysis used hourly weather outputs from the European Centre for Medium-Range Weather Forecasts. The recently released hourly reconstructions of historical weather allowed investigation of daily cycles. The next step, Chiodi said, is to further explore the causes of these changes in nighttime vapor pressure deficit. After that, he hopes to connect the atmospheric conditions more directly to fuel moisture and fire behavior.