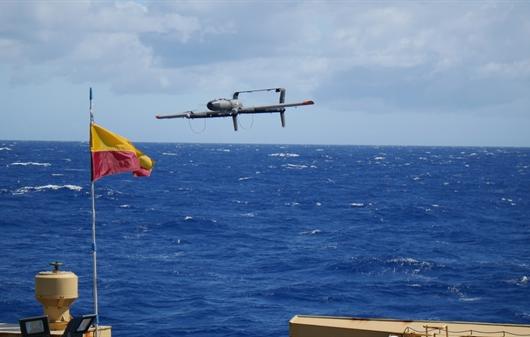 A hybrid quadrotor (HQ) unmanned aircraft systems (UAS) platform with the ability of vertical take-off and landing (VTOL) and conversion to fixed wing (FW) flight allows for operations from ships, where launch and recover space is constrained while maintaining the range and endurance of a FW aircraft. The HQ technology eliminates the need for rail launchers and aerial capture technologies such as large nets and wires. With a capability of carrying a 15 lb payload and an endurance of 5 to 15 hours such an HQ UAS would greatly enhance many areas of NOAA research including climate and air quality studies, fishery and mammal surveys, oil spill detection, weather observations, and post severe weather damage assessments. With funding from the NOAA UAS Program Office, the Atmospheric Chemistry Group at NOAA PMEL has been working toward building this capability within NOAA with the goal of making vertical measurements of aerosol properties from a NOAA ship.

In June of 2016, PMEL worked with Latitude Engineering (now L3 Latitude) proving the concept of VTOL-FW launch and recovery of a 20-lb test HQ UAS from the NOAA RV Oscar Elton Sette. With lessons learned from those tests, L3 Latitude is currently in the second phase of a NOAA ​Small Business Innovation Research (SBIR) to develop an HQ-55 UAS able to fly autonomously from a NOAA ship. The HQ-55 is being designed with a 15-lb payload capability, 5 to 15-hour flight endurance depending on payload weight, and an altitude ceiling of 14,000 ft. At a total weight of under 55-lbs (including the payload) the HQ-55 will be compliant with FAA Part 107 which allows for the operation of UAS in National Airspace.

In a parallel effort, PMEL is developing an aerosol payload for integration into the HQ-55 with instruments able to measure total particle number concentration, particle number size distribution, aerosol light absorption, solar irradiance and sky radiance, aerosol composition, and meteorological parameters. The payload is modular in design to allow for quick swapping in and out of the UAS so that multiple payloads, each with different measuring capabilities, can be used during a given observation period. A previous version of the payload was flown in the Arctic (Svalbard, Norway) in 2011 and 2015 to investigate climate impacts of soot pollution. Through that work, the aerosol payload transitioned to Technical Readiness Level 8, system demonstration in an operational environment.

First shipboard tests of the HQ-55 with the integrated aerosol payload are planned for Spring 2019 from a NOAA ship. As part of these flights, NOAA pilots will continue training to fly the HQ-55. Through a collaboration between NOAA PMEL, the UAS Program Office, the Office of Marine and Aviation Operations, and the SBIR Program Office, the ultimate goal is to provide a VTOL-FW UAS capability within NOAA for use by all line offices through the Aircraft Operations Center.