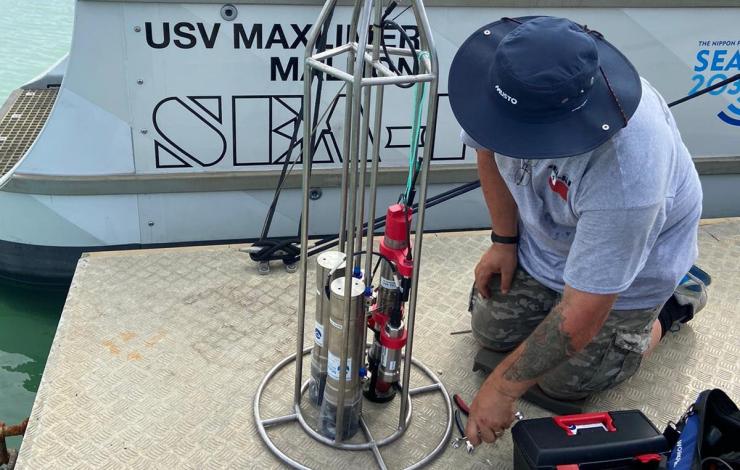 SeaKit engineer on the dock in Tonga mounting the PMEL MAPRs onto a specifically designed cage to fit on the USV Maxlimer. Click on the image to enlarge. Photo Credit: Sea-Kit International/NIWA/Nippon Foundation

July – August 2022:  PMEL's Sharon Walker joined a team of engineers, multibeam mapping experts, and scientists from around the globe to complete a high-resolution bathymetric and hydrothermal plume survey of the post-eruption caldera at the Hunga Tonga-Hunga Ha’apai (HTHH) volcano. This is the first time a survey that includes direct measurements of the water column up to 300 meters deep has been conducted entirely remotely using an uncrewed surface vessel operated and monitored by engineers and scientists who are located across the globe.

As part of the Tonga Eruption Seabed Mapping Project (TESMaP), PMEL provided Miniature Autonomous Plume Recorder (MAPR) instruments to determine the level of ongoing volcanic and hydrothermal activity within the caldera. A winch and custom built frame were added to the uncrewed surface vessel (USV) Maxlimer from Sea-Kit International Ltd to house and deploy the MAPRs and a small CTD. To date, 24 vertical casts and 9 tow-yo’s have been successfully completed. The USV Maxlimer is also equipped with a multibeam echo sounder to acoustically measure depth and state of the seabed.

The powerful eruption of HTHH on January 15, 2022 caused devastating tsunamis in Tonga and an unprecedented air pressure wave that circled the globe. Data about these impacts was quickly available from a range of ocean and atmosphere observing systems including satellites, tide gauges, DART tsunami systems, weather stations, Saildrone uncrewed surface vehicles, and human observations. The impact of the eruption on the ocean environment included observations of pumice rafts and discolored water dispersing at the surface. Knowing what happened deep beneath the surface of the ocean was harder to understand and is important for determining the level of ongoing risk from this volcano.

Results show the caldera was excavated to a depth of 850 meters by the eruption, which is 700 meters deeper than pre-eruption. MAPR sensors have confirmed that there is ongoing activity within the caldera, though it could be due to continuing eruption at a reduced intensity, hydrothermal venting driven by cooling lava, or both. The distribution and thickness of ash deposits on the flanks of the volcano outside the caldera were mapped during phase 1 of the project, along with the collection of seawater, rock, and sediment samples, in April by New Zealand’s National Institute of Water and Atmospheric Research (NIWA) R/V Tangaroa. This project is funded by the Nippon Foundation, in partnership with NIWA and Seabed 2030, with additional support and collaboration on MAPR results from GNS Science.

The USV Maxlimer is being operated from Sea-Kit’s command center in Essex, UK (over 16,000 miles from the study site), the survey team has been working from places as far and wide as Australia, Poland, Egypt, Ireland, Mauritius, Seattle (USA) and New Zealand.