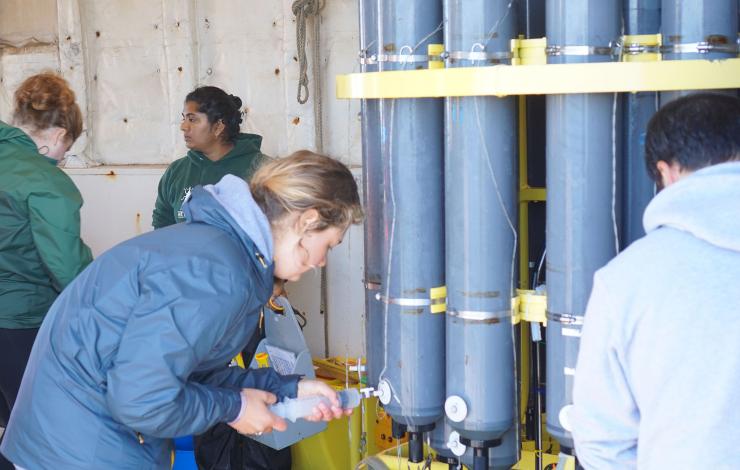 On June 13, scientists aboard the NOAA Ship Ronald H. Brown set out on the West Coast Ocean Acidification Research Cruise to characterize conditions along the West Coast of North America and continue to build a unique time-series of carbon and hydrographic measurements in areas expected to be highly impacted by ocean acidification. Scientists have been collecting samples from CTDs, collecting plankton and water samples for genomics analysis, and conducting the first systematic regional survey of methane gas coming out of the thousands of seeps along the west coast.

The California Current System, running along the North American west coast from British Columbia to Baja California, is a region where seasonal upwelling brings nutrient- and carbon dioxide-rich and oxygen-poor waters to the surface. Increasing levels of carbon dioxide from upwelling and anthropogenic emissions, cause a series of chemical reactions that are ultimately increasing acidity in these waters. Because it is an area with high rates of primary production by phytoplankton, air-sea carbon dioxide exchange, and carbon export to the open ocean and sediments, it is particularly susceptible to the impacts of ocean acidification and hypoxia. Understanding the progression of ocean acidification in coastal areas in the context of these other natural processes is critical for developing management, mitigation, and adaptation strategies.

This 47-day research cruise brings together an international team of scientists from the United States, Canada, Mexico, Finland, and the Netherlands to measure acidity, temperature, oxygen, and chlorophyll from 16 transect lines stretching from British Columbia, Canada to San Diego, California. They also have deployed net tows to sample phytoplankton, zooplankton, and fish to analyze how the marine food web is being affected by acidified waters.

With data collected from this cruise, and previous ocean acidification cruises in this region, scientists are documenting the changing ocean acidification conditions and how they are impacting marine ecosystems against a backdrop of multiple stressors including warming and deoxygenation.  In 2016, measurements from this cruise demonstrated, for the first time, that ocean acidification along the US Pacific Northwest coast is impacting the shells and sensory organs of some larval Dungeness crab and that pteropods sampled near the coasts of Washington and Oregon had shells 37 percent thinner than those in waters further offshore.

With the comprehensive approach taken on this year’s mission- combining detailed physical, chemical and biological measurements - we will not only  better understand how our ocean is changing, but also test what new tools can be used to assess the future of these important marine ecosystems.

“A strong understanding of both the changes in chemistry and marine life allows us to make informed decisions to sustain the ecosystems, communities and industry members along the West coast,” says Libby Jewett, Director of NOAA’s Ocean Acidification Program which funds this research cruise.