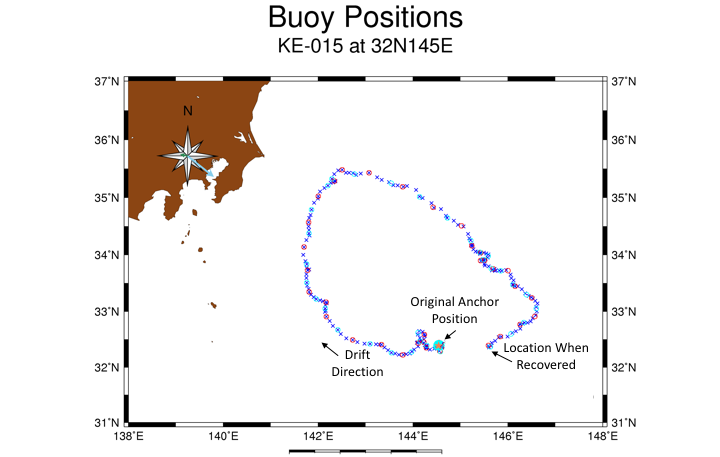 GPS positions from the PMEL KEO mooring during the period when it was adrift show the clockwise motion, which brought the buoy almost back to its anchor location before being rescued.

On October 19, 2017, a surface mooring at the Kuroshio Extension Observatory (KEO) maintained by NOAA’s Pacific Marine Environmental Laboratory (PMEL) broke from its anchor and went adrift.  Though it drifted in the North Pacific for two full months before being rescued, the buoy stayed in the Kuroshio Extension’s recirculation gyre, and had nearly made its way back to the original anchor location to meet the rescue ship.

The KEO station is located off the coast of Japan. NOAA has maintained a surface mooring there since 2004, and Japan Agency for Marine-Earth Science and Technology (JAMSTEC) has maintained a subsurface sediment trap at KEO since 2014. The KEO surface mooring carries a suite of instrumentation to monitor air-sea exchanges of heat, moisture, momentum (wind stress), and carbon dioxide; surface ocean acidification; and upper ocean temperature, salinity and currents. The combined data sets from both moorings enable computation of the physical and biological pumps of the carbon cycle in this key region of the North Pacific.  As such, the site has become a focal point for international climate research.

Researchers are now looking with interest at the data set recorded during the time when the buoy was drifting.  The path taken by the buoy is interesting in itself, as it outlines the anti-cyclonic flowing recirculation gyre south of the Kuroshio Extension.  Because the mooring still carried subsurface instruments down to 425 meters, the drifting mooring observations can be used to study the air-sea interactions along the entire recirculation gyre.

The drifting buoy was rescued and redeployed by PMEL technicians aboard the JAMSTEC ship Yokosuka at the end of December 2017.  Now that it has been redeployed, the KEO mooring will continue to provide high quality measurements for research.  In January 2018, it will be at the center of an international science expedition studying upper ocean heat and carbon exchanges.  The mission includes researchers from University of Tokyo, JAMSTEC, Monterey Bay Aquarium Research Institute, and North Carolina State University.

Thanks to the joint efforts of PMEL and JAMSTEC, the NOAA KEO mooring is back where it belongs, continuing to be a central part of the research in this region.