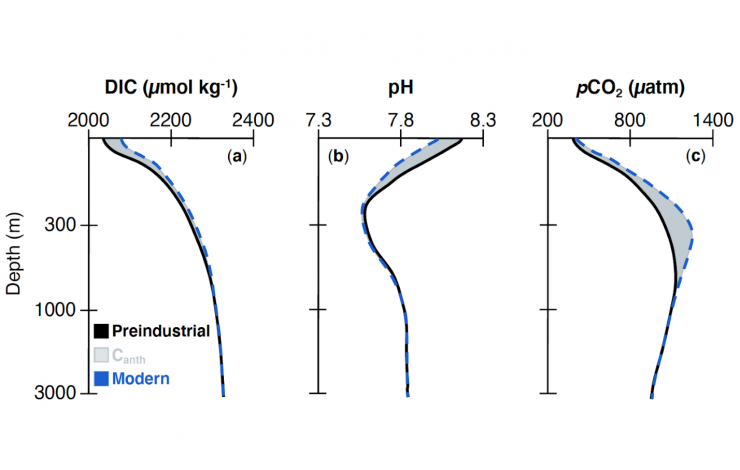 The modern ocean (blue dashed profiles) reflects the combination of natural, preindustrial conditions (black profiles) and human-induced changes (gray shading). (a) Dissolved inorganic carbon (DIC; µmol kg-1) has increased most near the surface where the ocean absorbs CO2 from the atmosphere. This has caused measurable and distinct changes in (b) pH and (c) pCO2 (µatm). Click on image to enlarge.

The ocean plays a key role in mitigating climate change by absorbing about 25 percent of the carbon dioxide gas (CO2) released into the atmosphere each year by human activities. However, this comes at a cost to ocean health because the uptake of this human-released carbon causes changes in ocean chemistry, called ocean acidification (OA), that can be detrimental to marine ecosystems.

A University of California - Santa Cruz (UCSC) and NOAA led research team set out to understand how OA metrics, such as pH and the partial pressure of CO2 (pCO2), have changed below the surface waters of the open North Pacific Ocean and coastal California Current System since industrialization (~1750). The California Current Large Marine Ecosystem along the US West Coast is a highly productive coastal ecosystem fueled by seasonal upwelling of cold, nutrient-rich water that supports important fisheries, tourism, and cultural heritage.

This new research, led by Mar Arroyo, graduate student at UCSC, used observational data from research cruises as part of the GO-SHIP and West Coast Ocean Acidification surveys as well as output from a regional ocean model. The findings were published in the journal Geophysical Research Letters.

Scientists found that the OA metrics exhibit different patterns of change with depth due to the accumulation of human-released carbon (Figure1). The largest declines in pH occur near the surface ocean where this accumulation is the greatest, while the largest increases in pCO2 occur well below the ocean surface, where this accumulation is low. Notably, the subsurface pCO2 increase (greater than 200 µatm) exceeds the atmospheric change  since industrialization (~140 µatm). The researchers attribute these different patterns of change in OA metrics to the natural, vertical gradients in background ocean carbon chemistry that interact with human-released carbon.

“This is the first time we’ve identified and interpreted such a large, coherent feature of amplified subsurface pCO2 change in the ocean caused by human-released carbon” says Dr. Andrea Fassbender, co-author of the study. “When these waters re-emerge at the sea surface through regional upwelling, the elevated pCO2 burden will work to weaken the ocean carbon sink.”

Due to the amplified subsurface pCO2 change associated with human-released carbon addition, a significantly larger volume of subsurface water now contains pCO2 levels elevated enough to threaten the health of marine organisms than during the preindustrial period. Susceptible marine organisms living both on the seafloor and in the water column may now be subjected to hypercapnia, defined in this study as occurring when pCO2 levels exceed 1000 μatm. These high pCO2 levels have been shown to negatively impact physiological and neurological functions in fishes and other marine organisms by hindering their ability to remove CO2 during respiration and by disrupting internal acid-base processes. This study finds that hypercapnic conditions have expanded by 58-94% in waters above 750 meters along the US West Coast since the preindustrial period.