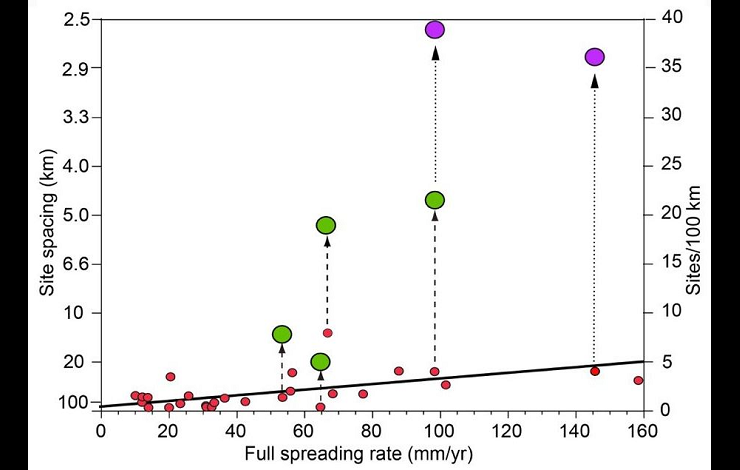 The heat from submarine volcanoes produces hundreds of hydrothermal hot springs along the mid-ocean ridge crest. These springs promote the exchange of heat and chemicals between the Earth’s crust and the ocean, providing energy to support ecosystems fueled by chemical reactions and creating exploitable deposits of mineral and bio-active resources. A new study by Baker et al. indicates that hot springs are far more common than previously thought, a discovery with crucial implications for diverse hypotheses by chemists, biologists, geologists, and others interested in ocean-seafloor interactions.

Three decades of research and exploration along the global mid-ocean ridge has produced a “common knowledge” that hydrothermal discharge sites are widely separated, with an average spacing ranging from ~12 to 220 km. These new results, surprisingly, indicate that sites are substantially more numerous and more closely spaced than these averages. Baker et al. tested the “common knowledge” using detailed surveys with advanced sensors along four mid-ocean ridge segments totaling 1500 km in length. Discharge sites were 3 to 6 times more common than listed in the authoritative global database (https://vents-data.interridge.org). Moreover, these results are corroborated by analyses of historical camera surveys of the seafloor at two of the sites. This finding provides new constraints for models of the biogeochemical impact of diffuse venting from volcanic ridges throughout the global ocean, the dispersal and genetic diversity of vent fauna, and the pattern of crustal fluid flow.

For example, recent work by NOAA’s Pacific Marine Environmental Laboratory (PMEL) found that the global input of hydrothermal dissolved iron is more than fourfold higher than previous estimates, implying that this iron sustains a substantial fraction of carbon production and export from the surface ocean. The new work provides a field validation for this model result by documenting a larger population of vent sources than presumed. These new sites include many with low-temperature diffuse flow; Baker et al. hypothesize that dissolved Fe export from such vents might be more important than that from the well-known high-temperature black smoker sites. Similarly, a model of larval exchange between hot-spring ecosystems on spreading centers in the backarc of the Marianas Trench Marine National Monument predicts low success relative to other areas in the western Pacific because the known population of vent sites is small. Recently, PMEL's Earth–Ocean Interactions group applied these new survey techniques to the southern Marianas backarc. The total number of active sites more than doubled, implying that the model of larval exchange between these two areas underestimates the true probability of successful dispersion of vent animals. This work also has application to anthropogenic disturbance (e.g., mining) to seafloor biological communities such as deep-sea corals.

For more information or to read the full article, please visit the journal's article page here.