Mysterious tsunami in the Caribbean Sea following the 2010 Haiti earthquake 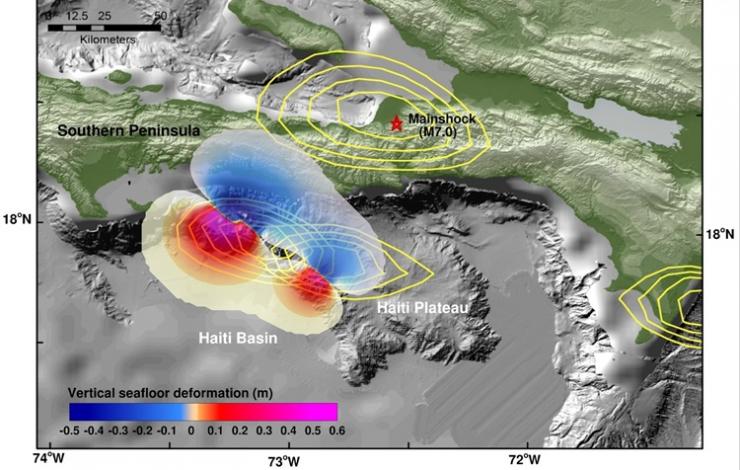 Tsunami finite-fault model for the dynamically-triggered early aftershocks of the 2010 M7.0 Haiti earthquake. Colors denote vertical seafloor deformation from the tsunami source model. Yellow contours are the peak back-projected energy contours of the main shock and the three early aftershocks. Red star is the epicenter of the 2010 Haiti earthquake. The DART buoy D42407 is positioned about 600 km southeast of the epicenter of the main shock in the Caribbean Sea.

The magnitude 7.0 Haiti earthquake of 2010 ruptured a complex fault network including both strike-slip faults (where two blocks slide past one another) and reverse faults (in which the upper block, above the fault plane, moves up and over the lower block). The earthquake affected the region spanning from the northern side of Haiti’s Southern Peninsula on land to an area off the north shore of the peninsula. The offshore rupture produced a minor tsunami that impacted the north shore of the Southern Peninsula.

Almost a decade later, a group of scientists from the U.S. Geological Survey, the University of Washington’s Joint Institute for the Study of the Atmosphere and Ocean (now CICOES)/NOAA PMEL, Florida State University and Universidad Complutense de Madrid found clues (derived from back-projection seismicity analysis) that aftershocks caused by passing seismic waves from the main shocks of the 2010 Haiti earthquake may have generated this mysterious tsunami. As an independent check against the seismic data, tsunami source inversions using the DART-recorded tsunami waveform further confirm that two consecutive aftershocks located 85 km southwest of the epicenter, occurring 20-60 seconds after the main shock with magnitudes of 6.8 and 6.5, may have excited the tsunami that impacted the south shore of the Southern Peninsula. The agreement between tsunami source models and seismic and tectonic evidence highlights that earthquakes on land, including strike-slip faults, can generate tsunamis by dynamically triggering offshore aftershocks, and these need to be accounted for in future tsunami warning protocols.

For more information or to read the full article, visit the journal's article page.