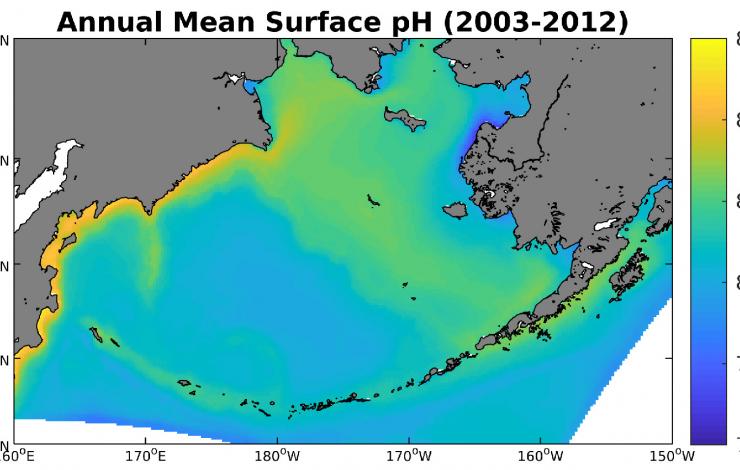 Due to naturally cold, low carbonate concentration waters, the Bering Sea is highly vulnerable to ocean acidification (OA), the process in which the absorption of human-released carbon dioxide by the oceans leads to a decrease in ocean water pH and carbonate ion concentration. Emerging evidence suggests that a number of important species in the Bering Sea (such as red king crab and Pacific cod) are vulnerable to OA due to direct (e.g., reduced growth and survival rates) and indirect (e.g., reduced food sources) effects. However, the harsh winter conditions, prevalence of sea ice, and large size of the Bering Sea have made it difficult to sample this region for OA using traditional ship-based observational methods.

In this paper, the authors developed a computational model of OA in the Bering Sea and used this model to run a simulation from 2003 to 2012. They found that pH levels on the Bering Sea shelf vary significantly between the inner and outer shelf domains. The inner shelf waters adjacent to the coastline tend to be relatively more corrosive (i.e., low pH) due to large inputs of freshwater runoff from river systems, such as the Yukon and Kuskokwim rivers. These rivers contain large amounts of carbon coming from the land, which push the coastal waters to a more acidified state. Conversely, outer shelf waters located outside the area of river influence contain relatively high pH waters due to substantial photosynthetic activity by marine phytoplankton. This distinction between the inner and outer shelf is most pronounced in late spring and early summer, when the magnitude of river runoff is greatest and the spring phytoplankton bloom is in full swing.

The authors also examined the impact of a short-term climate shift, from relatively warm, low sea ice conditions in the early 2000s, to relatively cold, high sea ice conditions from 2010 to 2012. They found that this transition produced a number of physical and biological changes throughout the Bering Sea shelf, which also modified the pH of the water. Many regions experienced a rate of pH decline faster than the average rate in the global oceans due to OA, while some regions did not experience a significant change in pH. Nonetheless, the shelf as a whole experienced a significant decrease in pH and carbonate ion concentration in both surface and bottom waters. Ongoing work is using this model combined with the output of global-scale Earth System Models to project OA for the Bering Sea over multi-decadal timeframes.