Frequency of Extreme El Niños to Double in the 21st Century 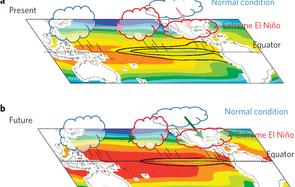 Present (a) and future (b) convection zones in the western Pacific.

In a paper recently published in Nature Climate Change, a group of climate scientists, including Dr. Michael McPhaden of PMEL, used 20 climate models to assess possible changes in El Niño behavior in response to greenhouse gas forcing over the next 100 years. They found a consistent pattern across most models for the frequency of intense El Niños to double in the 21st century, with the likelihood of extreme events occurring roughly once every 10 years instead of once every 20. Intense El Niños, like those in 1982-83 and 1997-98, have dramatic worldwide impacts, increasing the probability of droughts, floods, heat waves and extreme weather events in far reaching parts of the globe.

El Niño events are a prominent feature of climate variability with global climatic impacts. The 1997/98 episode, often referred to as ‘the climate event of the twentieth century and the 1982/83 extreme El Niño, featured a pronounced eastward extension of the west Pacific warm pool and development of atmospheric convection, and hence a huge rainfall increase, in the usually cold and dry equatorial eastern Pacific. Such a massive reorganization of atmospheric convection, which we define as an extreme El Niño, severely disrupted global weather patterns, affecting ecosystems, agriculture, tropical cyclones, drought, bushfires, floods and other extreme weather events worldwide. Potential future changes in such extreme El Niño occurrences could have profound socio-economic consequences. Here we present climate modelling evidence for a doubling in the occurrences in the future in response to greenhouse warming. We estimate the change by aggregating results from climate models in the Coupled Model Intercomparison Project phases 3 (CMIP3; ref. 10) and 5 (CMIP5; ref. 11) multi-model databases, and a perturbed physics ensemble. The increased frequency arises from a projected surface warming over the eastern equatorial Pacific that occurs faster than in the surrounding ocean waters, facilitating more occurrences of atmospheric convection in the eastern equatorial region.